From a distance, Harrisburg, Oregon looks like a typically sleepy Pacific Northwest rural town. Yet the area surrounding Harrisburg is home to The Church of the First Born – a congregation, led by Bree’s father, that is by no means ordinary. The Church of the First Born is a religious cult that practices shunning and an extreme version of faith healing: members are not allowed to seek scientific intervention for any conditions, no matter how life-threatening. The Church has made the news, many times, when members have died from the lack of medical care. Bree’s mother was one of those members. The rocker was only seven years old when she watched the tragedy happen. A simple medical treatment could have saved her life, but because the Church prohibited it, Bree was left without a mom. 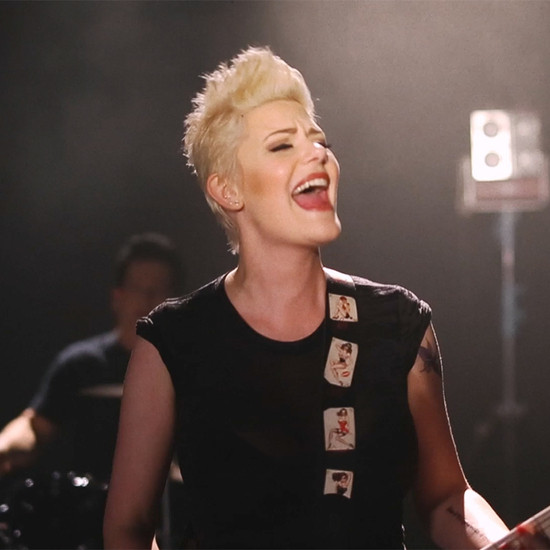 Understandably, Bree grew up with a grudge against The Church of the First Born, and when she was seventeen years old, she was booted out of the community and shunned for life. Set adrift in the Northwest and cut off from the rest of her devout family, Bree made trouble – until the day she decided to start making music. The moment she plugged in, she channeled all the frustration, rejection, disbelief, and faith in herself into fierce, searing, two-fisted songs. You’ll hear roots of early 70’s rock, British Invasion pop, and even classic country in her sound, and more than a hint of the gospel music she grew up singing in her father’s cult. Blended together, Bree and her namesake band have created their own style of 21st century no-nonsense, melodic, forcefully-delivered rock. New Skin, her sophomore ten song album on Werewolf Tunes, is filled with statements of self-actualization from a woman who has overcome tremendous adversity. “Damn, I’m Being Me Again,” the lead single, could double as a message straight to the community that cast her out – an exciting statement of intent from an artist finding her voice and her footing. “Broken” is even tougher, even leaner, even harder to deny with a pounding groove deeper than the Willamette River that runs through Bree’s hometown.

BREE (the band) makes a big noise – so big that you might doubt that only three people could generate it. The “Broken” clip is a testament to their power. Bree and her bandmates play with total determination and deliver their song with an intensity reminiscent of early 70’s American power trios like The James Gang and Grand Funk Railroad. The video is a calling-card for BREE’s spectacularly focused live show, which has already taken the combo across the Atlantic for critically acclaimed U.K. tours with The Supersuckers (Acetate), The Parlotones (Gallo), and the Lottery Winners (Warner Brothers). Everywhere they’ve gone, they’ve left stages smoking, and reaffirmed their absolute faith – not in medical miracles from above, but the power of rock and roll.