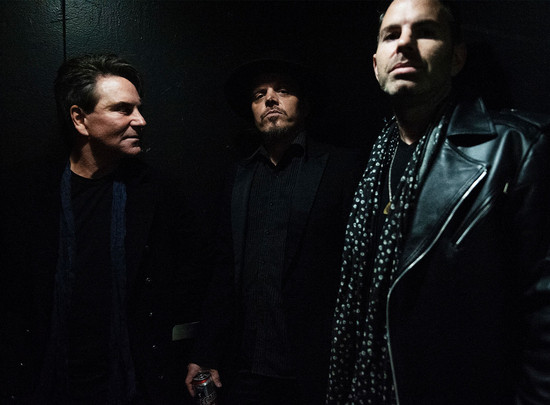 There’s certainly no shortage of bands in Southern California. Few of them, however, channel the essential weirdness of the place: its uncanny juxtapositions, its strange geography, the ghosts that stalk the pine forests on the fringes of the cities. Unlike their Los Angeleno peers, the musicians in ASHRR aren’t oriented toward the sun and the sea. Instead, they’ve turned their faces toward the shadows of the vast and ungovernable interior and crafted a sound that matches the peculiar feel of the landscape. It’s no wonder that the group has become a favorite of the influential website BuzzbandsLA. The synthesizer pulses, ominous vocals, and relentless beats might allude to Krautrock and Berlin-era Bowie. Still, the excitement, paranoia, and sheer psychedelic destabilization that ASHRR capture in their music their bold debut set, could have come from nowhere else but the darkest corners of the Golden State.

And in Keith Musil, they’ve found a video director who shares their aesthetic – one with the imagination and power to bring their visions to the screen. Musil, who has also worked with Kid Moxie, The Kooks, and Tennis, has collaborated with ASHRR on a series of videos that capture the oddness, wonder, and uncanniness of Southern California. “All Yours All Mine” (Darker Days Mix), the newest clip he’s shot for the band, is a pure expression of the uncertainty and mystery that animates all of ASHRR’s music. The video follows a restless man, alone, in a beautiful house in the deep pines; there, he’s stalked by duplicates of himself, all of whom seem to exist outside of time. Sometimes, he seems aware of the presence of his doubles. Sometimes, he’s simply conscious that there’s something wrong. In the shot that crowns the clip, he stares back at the camera with unwavering intensity. We don’t know what demons he’s seeing, but they’ve certainly got his attention in full.

Because one Musil-ASHRR collaboration is never enough, we’re also sharing their clip for “Don’t Wait Too Long,” a pure reverie with ominous undertones. The director follows a fetching but spectral woman around the sun-beaten streets of Crestline and Lake Gregory, a mountain town that’s only a short drive from urban San Bernardino, but feels as if it’s on a completely different planet. She’s headed to a roller rink in the desert, but before she gets there, she’s filmed in front of a series of old buildings that are poetic in their disrepair. Perhaps she’s motivated by some ancient injury: in a striking shot, she approaches a wall full of family photographs with an African mask on her face.