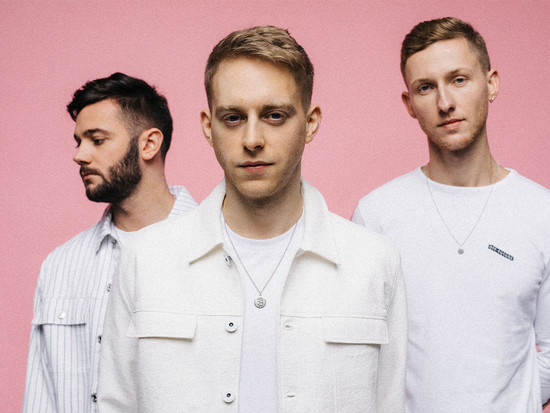 It only took one rehearsal to solidify the foundation as a band for flawes. Josh Carruthers (vocals, keyboards), Freddie Edwards (guitar), and Josh Hussey (drums) were all on separate paths planning to form their own bands in the summer of 2015. Carruthers spent two years touring with Ella Eyre until she heard and was so impressed with his music that she wanted him as a support act on tour rather than a band member. The only problem was the lack of band Carruthers had, but a chance meeting with Edwards and Hussey got the ball rolling.

The London based trio was greeted with instant popularity and adoption by the radio. One of their initial releases, “Don’t Count on Me” was made record of the week on Radio 1 and reached #8 on Spotify’s Viral Chart. Following their breakthrough was a blur of shows, studio time, festival appearances, and a growing fan base. In between the chaos, Flawes pulled themselves back from the public eye to focus on their sound and to record some music. After 18 months, they returned to the limelight picking up where they left off.

“Look No Further” takes place in a beautiful mansion filled with no love to hold it together. Carruthers is like a shadow, following a woman through her estate, watching her deal with misery in her own ways. In one room, her eyes are emotionless with a cigarette in hand and a full shot glass ready for her on the table. Then she’s in the bathroom having a one-sided argument with a man showering who doesn’t seem to care. Next, he finds her having a breakdown in front of a TV while Flawes jams away in the room over. Eventually, she walks into their room, only to find it abandoned with all of their gear left behind.