“Please don’t leave me,” croons a passionate Mattia Pironti, his heart on his sleeve and his vocal as virtuosic as it’s ever been in the new single “Don’t Stand a Chance,” and though his voice is but one element in this suave song, it’s undeniably the most fetching. In “Don’t Stand a Chance,” Pironti doesn’t hesitate to put it all out there for us to hear and absorb in the intricately-designed lyrics he dishes out so seamlessly, and although there’s a lot to be said about the other components in this track, there’s never any doubt as to who and what the main draw is here. 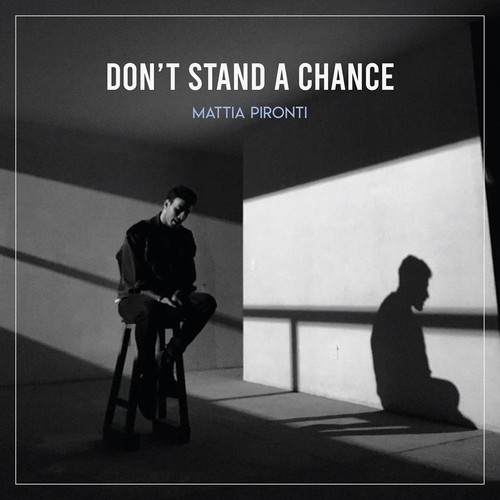 Lyrics aside, “Don’t Stand a Chance” is a remarkably evocative song from an instrumental perspective. By letting the beats create a textured imprint on the mix, there’s a grittiness to the bottom-half of this single that I haven’t heard in a lot of pop music this season. It’s not as rough and tumble as some of the alternative pop I’ve reviewed coming out of the States has been, but make no mistake about it – Pironti isn’t sacrificing any of his edginess for a streamlined sound in his new release for even a moment’s time.

I really appreciate there being zero fluff in this track, and considering just how much I’ve been encountering over the last few months out of this artist’s scene, it’s refreshing to say the very least. One of the biggest problems that performers like Mattia Pironti face at this stage of their careers is having a concept but basically nothing to fill in the edges with artistically; unlike many of his peers, Pironti establishes himself as an on-point creative with a knack for conjuring up really sexy vocal harmonies out of thin air in “Don’t Stand a Chance,” and that alone sets the first single from his debut record Mirror apart from the crowd.

If Mattia were to remix this song with a touch more bass than it’s already got, I’m pretty certain that it would make for excellent nightclub fodder (especially when factoring in the restrained grooves that dominate the middle of the track with their violent thrust). There’s plenty of understated swing in “Don’t Stand a Chance” that could be manipulated into something really danceable in the right capacity, but even as it stands right now, this is still a song that you can’t help but synchronize your hips with after a single listen.

Elegant, efficient and eager in tempo when it matters the most, “Don’t Stand a Chance” from Mattia Pironti is a hot autumn single for sure and an awesome addition to any pop lover’s playlist throughout the month of November. It’s only a small sampling of what’s to come next in Mirror, but as far as lean and mean pop singles go, it’s a really tough act to follow. I’m very interested in seeing how Pironti develops over the next year, but regardless of how well-received his forthcoming LP is by critics, he’s already made quite the mark on Canadian audiences with the release of his first three songs.