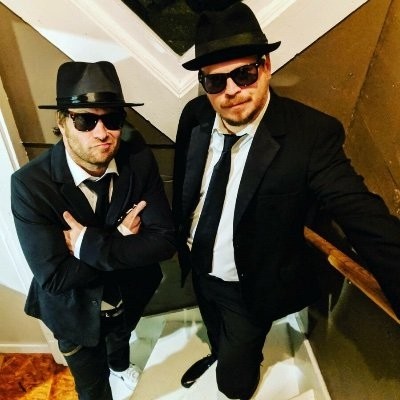 In a rock band, the bass player steers, and the drummer handles the brakes and the accelerator. Everybody else is just backseat driving. And if you don’t believe that, well, UTILITY is here to change your mind. This Portland duo dispenses with everything extraneous to the rhythm section and still manages to rock as hard as any guitar group you might want to name. UTILITY makes it happen with the most rudimentary materials possible: Adam Draper’s relentless drums and Ryan Heise’s vocals and big, overdriven bass.

If those names sound familiar to you, you’re not alone; you also may be from the Pacific Northwest. Draper and Heise have been rocking Oregon for years, and in many creative and inspired combos, including Down Gown, System and Station, Swim Swam Swum, and Last Giant. Memory Of The World, the most recent Last Giant set, was one of Portland’s best-loved independent albums of 2017: a gut-busting, menacing, wonderfully rocking collection of Ryan Heise songs that drew equally from garage music, bare-bones punk, and the more aggressive side of ’70s prog. With UTILITY, Heise has taken the Last Giant sound and melted it down further, and what’s left in the crucible is something compact, and elementary, and molten hot.

The distinctive sound of “Bull In The Shop,” the lead single from UTILITY’s debut set, exemplifies the duo’s approach and demonstrates exactly how much their rowdy minimalism can achieve. The song begins with a beat that’s rich with both power and tonality; within seconds, it’s joined by an amplified bass riff that’s thick enough to rattle your speakers and cover the entire frequency spectrum. Heise’s sound is a marvel: his signal has both a dark, murky bottom end and a whipsaw-sharp top. Most bass players would beg for either one. He’s got both.

Portland is well known as a place of musical achievement and innovation, but the culture around town is anything but pretentious. Oregon musicians tend to be down-to-earth and even self-deprecating, and as the “Bull In The Shop” video shows, Draper and Heise fit right in. They may be deadly serious about their sound, but they’re more than comfortable poking fun at their appearance and their aspirations. The pair let us into a backyard planning session for their video – and while Heise is enthusiastic about what they’re cooking up, Draper is skeptical. Nevertheless, when the lights come up on stage, and the camera starts rolling, they’re both in outrageous costumes befitting the instruments they play. Draper becomes a nunchaku-twirling ninja, and a shirtless Heise swings around a mighty barbarian sword.