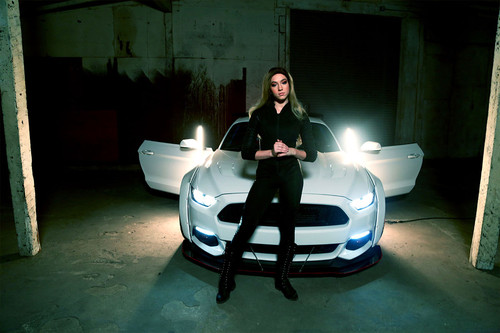 When last we saw pop singer Alexa Friedman, she was half fish. Yes, the gorgeously-shot clip for “Meant To Be,” her last single, closed with an image of Friedman as a mermaid, sitting pretty on the rocks by the ocean with the exact combination of arrogance and bemusement that we’d expect to find in a mythological being. Friedman’s mermaid impersonation was a fully inhabited one: she looked and acted the part, and her performance suggested a deep understanding of the power and resonance of fairy tales. For “Take Me Down” her latest video, she’s animating a completely different fantasy. This time out, Friedman is a martial arts master and a lethal swords-woman, and she’s taking it to the bad guys with extreme prejudice. Is Friedman as convincing a ninja as she was a mermaid? Go on and press play; we’re sure you’ll agree she is, once again, right in her element.

What accounts for the change in tone? Like all young pop singers, Friedman has lately had to overcome adversity; what makes her different from the competition is the ease and skill with which she’s turned that personal struggle into enjoyable music. Since the 2017 release of her single “Enrapture,” which has racked up hundreds of thousands of views, Alexa Friedman’s talent and personal appeal have never been in question. What she’s shown in her subsequent singles is her flexibility and her range – and her staying power, too. “Take Me Down” is a showcase for Friedman and an exhibition of the many facets of her still-budding artistry. She raps a little, sings a lot more, buzzes through her chorus with enthusiasm and swagger, and projects a kind of inner toughness that her prior work only hinted at. This is feel-good, self-affirmatory pop for sure, and a statement of perseverance in spite of the odds, but it’s also a demonstration of her maturity and her unerring ability to handle pop melodies, rhythms, and arrangements.

And apparently, she can also handle a katana! Sometimes she doesn’t even need the blade; in the “Take Me Down” clip, her bare fists are just as deadly as her steel. Friedman’s fight sequences are complicated and cannily shot, and although she’s constantly in peril throughout the video, she mows through her opponents with impressive force. Yet when she triumphs over the big boss and unmasks her principal adversary, she’s in for a surprise – one that adds depth to an already relentlessly entertaining video.