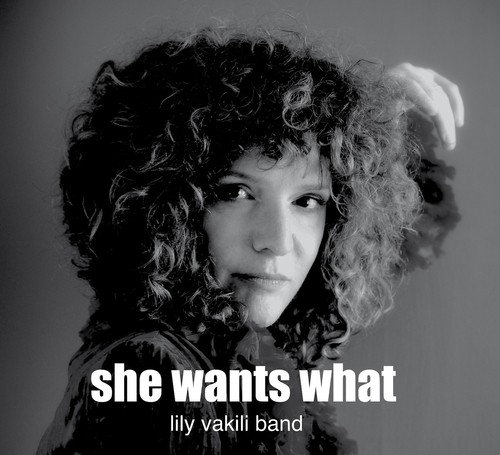 Lily Vakili’s passionate vocal bray reminds me of prime Patti Smith; she belts out the lyrics for her latest single “She Wants What” with such unmitigated go for broke energy listeners will be swept away by her possessed commitment to realizing the potential behind each line. She’s backed by an equally ferocious musical attack prioritizing clenched fist power over finesse, though the latter quality is in evidence throughout the song’s brief running time. This song is a call to arms. “She Wants What”, slated for inclusion on her next EP release Set of Seven, embraces rock music’s bruising spirit head on and storms listener’s ramparts with chest-beating self assurance and a determination to be taken as seriously as a heart attack. This is music that doesn’t mince words and doesn’t waste a note attempting to connect with listeners.

That connection is the heart of what makes this song such a memorable listening experience. “She Wants What”. Vakili is reaching out for a specific audience with this track and its message of empowerment, but anyone who loves and values convincing hard rock pounding away with conviction will find fertile ground with this performance. The lyrics are switchblade sharp. You won’t find Vakili soliloquizing with an avalanche of words; instead, she goes straight for the jugular and doesn’t mince a single word. The words burn with intelligence as well – this is a songwriter who knows what she wants to say and conveys it with pointed urgency. It is lyrical content cut to complement the musical arrangement and slices deep into the listener from the outset.

Much of the reason why is Vakili’s vocal style. She tosses any inklings of caution out the window and the full-throated treatment she gives the songwriting raises the stakes for her audience – there’s no question this song and how she puts across its message means a tremendous amount to her. This unbreakable spirit even comes through in the eyes glazed over near-hypnosis of the chorus. You get the sense of someone who holds the appetite for life laced through the lyric close to her heart and cannot be swayed from her goal. Great rock music burns with unquenchable thirst – for freedom, experience, to be heard. We hear Vakili loud and clear and a lifetime of blazing her own path on her own terms fills every second of this recording.

It likewise funnels nuclear powered music that masters the fundamentals while still creating maximum drama for listeners. The same sense of stakes informing her vocal colors the instrumental attack as well, especially the guitars. It builds from a curt and effective guitar riff recurring throughout the track but takes a handful of detours along the way without ever losing the plot. The song’s drumming and bass playing are as effective. They lay an unshakable edifice for the guitars and vocals while never dumbing down the playing too much. It may be simple, but the musicianship of this song is high from first note to last. Lily Vakili’s band leaves a mark with “She Wants What” that won’t soon fade away.