Hot on the heels of their just-released self-titled EP, Chase Engel and the Night Shift have issued a new video for one of their top tracks, “Lost.” Produced by Tesla’s Brian Wheat and released via his label, J Street Entertainment, the band (which is comprised of singer Engel, lead guitarist Conner Schrems, rhythm guitarist/saxophonist Noah Schieber, bassist Jason King, and drummer Matt Gottlieb) proves that fun can still exist within rock – and the “Lost” clip further confirms this claim. 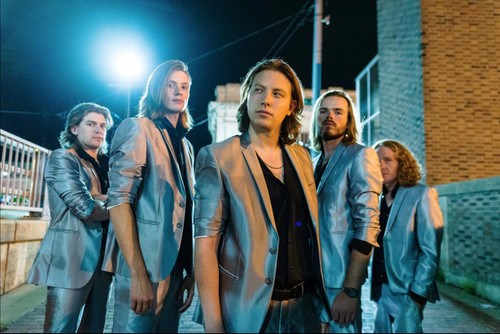 And as it turns out, the video was the first that they sent to Brian, who in turn began working with the band shortly thereafter. “This was the first music video we shot for the EP,” explains Chase. It was also the first time we really tried to showcase what we look like at a live show. For us we felt like everything was riding on this video. Brian knew a little bit about what we were doing with our show but not a lot. So with this being the first official thing we sent him it had to be awesome. It wasn’t until after he seen this video that he said OK I think we’ve got something here. We actually shut the entire video three separate times over the course of about a year until we got the video to where we wanted it and in the end it was worth it!” And Conner is equally pleased with the finished product. “It’s not easy keeping people attention anymore for a full 3 minutes, especially with a performance video, but I think we pulled it off with ‘Lost’.”