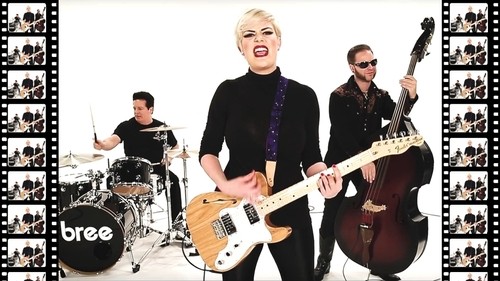 “Sometimes I wanna punch myself in the face.” What could’ve been a sad-sack sentiment, some phony contrivance, is, in BREE’s hands, a glorious war cry shouted from the rooftop. She knows exactly who she is, and there’s not much she can do about it, except pen killer rock songs that laugh in the face of self-seriousness. Where she does take things seriously is where it matters: BREE has mined a complicated life to kick out jams full of honesty and overdrive. She grew up in an Oregon religious cult led by her Dad, lost her Mom at six (from swallowing a needle), was thrown on the street at seventeen and, leaving the frying pan for the fire, hit the bricks for the bright lights of Nashville. Music City is a tough nut to crack, but she was soon named Nashville Artist of the Year by international indie tastemakers RAW. She hopped the pond and pulled off a one-band British invasion doing three separate tours with The Parlotones, The Supersuckers and The Lottery Winners. The UK got what she and her powerhouse rhythm section, drummer David J. Castello and upright bassist Maryk McNeely were doing, and they toured til the wheels came off. Now they’re back in the States and looking for who’s ass to kick first. BREE’s packed more triumphs into her career than most of the rockers she’s easily out-rocking, and with this track, damn, she’s being her again.

Four power chords cure everything, even that thing inside us telling us to hit the self-destruct button every five minutes. “Damn, I’m Being Me Again” makes being your own worst enemy sound pretty goddamn fun. It makes sense when you consider BREE learned from the best, filling her head throughout her formative years with Alkaline Trio, Green Day, Avril, and amp-murderers The Who. The three-piece explodes with rock’s passion all wrapped up in radio-ready dynamics and melodicism. BREE’s downright incredible vocals are half-angel, half-uppercut: she belts it out like the black sheep with a pixie cut she is. David and Maryk are rocket fuel together, focusing the song’s raw power with blistering, airtight bass, and pounding drums. This is the first single off their upcoming New Skin LP, produced by Justin Cortelyou, who’s worked with Paul McCartney, Taylor Swift, Alice Cooper, Ke$ha, and more. At three furious minutes, this song of self-awareness is a non-stop blast. BREE’s got no use for frills and no room for regret.

BREE’s laying it bare with “Damn, I’m Being Me Again,” making no excuses for who she is or what she might do next. It’s a white-hot ripper that requires no set dressing, so the band does what they do best: they set up, plug in, and let loose. Director Casey Culver shot them in all black, with an all-black backline, against pure white, and the effect is striking. It’s a real tease for what the live show is like, minus only BREE’s inclination to climb to the top of Maryk’s upright bass mid-song and riff from on high. The Mod, monochromatic 60’s Brit Rock backdrop leaves the band plenty of space to tear it up in their natural element. Look out for the record later this year, and if they come through your town, look out.