Gregory Suarez’s “Blue Sky Kiss” opens with a wonderfully, jangly electric guitar intro, before going into a subdued pop-rock arrangement. This single is taken from Suarez’s album Around the World. In fact, its electric guitar/organ intro is so good, one wishes it would have continued throughout the whole song. 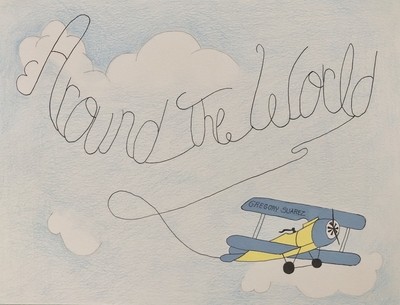 Suarez’s singing is light and airy, not powerful and boisterous. He has a tone perfectly suited for pop music, but not – at least from this song’s lone example – probably not meant for hard rock sounds. Towards the track’s end, Suarez throws in a spoken word part. This talking-to-the-music isn’t all that different from the singing sections, as Suarez mostly applies a somewhat conversational approach to ‘singing’ his songs. When he is singing, it’s with a clipped, sparse manner of enunciating his words. He doesn’t embellish. There’s no melisma in this song, which is the act of singing a single syllable of text while moving between several different notes in succession. It’s almost as though he’s applied the most minimal amount of melody to his singing, to give it a relatively unemotional presentation of his words.

Lyrically, “Blue Sky Kiss” is an ode to his wife or lover. In fact, he’s wishing for just one more daylight kiss. Therefore, you could say this is a song related (at least distantly) to the Starland Vocal Band’s “Afternoon Delight.” That 1977 song won a Grammy for Best Arrangement for Voices (duo, group or chorus). Its lyric celebrated lovemaking during the daylight hours. Granted, Suare’s song only speaks about kissing. But then again, one thing leads to another, right?

As love songs go, Suarez’s composition is fairly inconsequential. Granted, he does speak to how he messes up during the latter part of the song. However, the listener doesn’t get the feeling what he’s done wrong is any deal breaker. There aren’t a whole lot of details disclosed on Suarez’s song. He does mention how his girl wakes up before the dawn and that she takes the dogs for a walk. Other than that, this song is more about Suarez’s plea to the weather gods for more daylight hours.

The song’s personification of the sky is like Electric Light Orchestra’s “Mr. Blue Sky.” Jeff Lynne wasn’t looking to make a little whoopie, though. Instead, he only wanted a little better weather. He wanted less rain, more sun. Of course, he may have also been wishing for, you know, a little afternoon delight. If so, he didn’t exactly say it in this song.

This song does deserve kudos for being unique, due to its daylight-focus. Usually, nighttime is the right time for love. Many more songs are written about night love. People don’t go to dance at clubs during lunchtime, for instance. Furthermore, the moon – which, as we all know, only comes out at night – oftentimes plays a large, illuminating role in romance. Then again, sunshine and love many times go together well – only not as often as that blue moon overlooking a couple.

As songs about innocent kisses go, this is a pretty good one. It’s not about passionate kisses, not like Lucinda Williams’ “Passionate Kisses,” specifically is, but any song about love and romance is always welcome in our oftentimes loveless world.