The sounds of Canada’s best indie artists have been shaking up the States quite a bit lately, and after listening to the new single from Jeremy Rice, it isn’t difficult for me to understand why at all. Rice has been described by some as one of the premier melodic pop singers in his scene, and in the song “Arriianne,” he fires off some signature stylishness in a bold vocal that cuts to the core of what superior indie pop was always meant to sound like. With a voice like his, it doesn’t take much to melt hearts, and he demonstrates his skillset beautifully here. 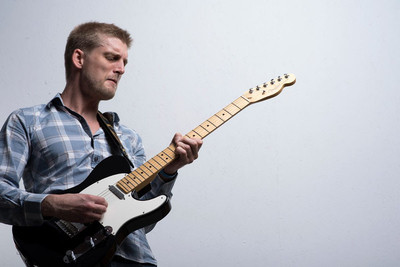 There’s a lot of throttling guitar play in “Arriianne” that goes completely unchecked in the mix (yielding quite a bit of indulgent chaos that I haven’t been able to get enough of), but it meets a forceful match in the similarly potent percussive track and its shadow, the bassline. It’s been hard to find this kind of riffing in the American underground recently, and that could explain why singles like this one have been doing as well with stateside listeners as they have been. This song has tons of zip and energy, but its main squeeze is its gargantuan, distorted grooves.

One thing that you won’t hear in the whole of this track, and the music video for “Arriianne” for that matter, is trace elements of an electronic influence – there are none. Where scores of his contemporaries are making the studio itself into an instrument with every shred of material that they compose, Jeremy Rice is doing the opposite in this song and, in essence, setting himself apart from those who would seek to destroy organic pop and true rock n’ roll as we know it. The beats are danceable without any extra fuzz or ornate grinding, and thus, they justly deserved to be left alone.

From the way that this single was structured, I think it would make for an excellent jam in a live setting. There’s room for its bolder parts to be expanded and manipulated into a seven-minute opus if the players saw fit – once again, mostly because of the dynamic style of the guitar play – but it could just as well be performed as-is (or even a touch faster) and make a big statement in the spotlight of any club, large or small. Rice shows us that he has the zany energy it takes to get a packed concert hall behind him in the video, and I can’t wait to see his show for myself at some point.

Of all the new singles that I’ve heard this September, this is probably my favorite from the Canadian side of the border. Jeremy Rice has almost no name recognition in the United States right now, but I can absolutely see “Arriianne” finding a lot of favor among college radio crowds as we transition into autumn. He’s got the voice, the vibrancy and the virtuous ideals that all pop stalwarts do, but a charismatic personality that is his and his alone in this amazingly straight-forward rocker.