There are moments during Fred Argir’s No Pushover album where he sounds a bit like the Sam Kinison of rock & roll. You remember comedian Sam Kinison, right? He was funny, just like all great comedians, but he was also one loud screamer. Kinison was the antithesis of Steven Wright, the quiet, monotone Bostonian best known for his cerebral comedy. Wright lulls you into his world, while Kinison is more along the lines of shock treatment. Argir, similarly, is far more Kinison than Wright. 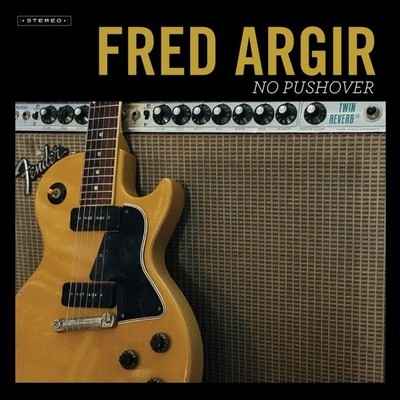 At his quietest moments, which are rare, Argir can sound a bit like Greg Dulli (of The Afghan Whigs). This comparison is most apparent during “Shake You,” which finds Argir announcing during its chorus, “I can’t seem to shake you.” The song is moody, with plenty of soloing electric guitar. “Watching The Days Slip” is another song that immediately brings The Afghan Whigs to mind. Maybe it’s the track’s stuttering electric guitar riff that places The Afghan Whigs front and center in the mind.

Although Argir sounds nothing like Robert Smith, one sweetly titled “Make Me Stupid” is build upon a Gothic-y, Cure-ish guitar riff. It hearkens back to that band’s moody 80s period, with albums like Faith and Pornography, where Smith would essentially moan over dark melodic grooves. The main difference between The Cure and this Argir track, though, is Argir’s blustery, bellowing lead vocal.

Speaking of The Cure, which had a hit with “Friday I’m in Love,” this album closes with one called “Every Day’s A Friday Night.” Again, though, this is an exercise in contrast. Whereas The Cure’s song is a boisterous celebration of finding love and romance, Argir’s lyric is more about hoping to find something, anything to celebrate. Argir never sounds particularly happy during No Pushover. He may be the loudest man in the room, but he’s not loudly bragging about any good things in his life.

“Time Machine Without A Key” is similar, mood-wise and lyrically, to the album’s other tracks. However, instead of loud, screaming electric guitar, this one is built upon an acoustic guitar part, and only (mostly) gently applies electric guitar. This is significant because the album’s cover features the picture of an electric guitar leaning against a Fender amp. This picture alone sums up much of the album’s contents, which is a lot of beautifully noisy rock and roll.

On “Fool,” Argir sings about how “the words don’t make sense anymore.” This track sounds to be about a messy romantic breakup. Argir comes off truly brokenhearted when singing it. It’s a slow torture, much like another presumable influence, Bob Mould. Mould is the king of brokenhearted love songs, and this recording features a strong resemblance to many of Mould’s best.

Even though Sam Kinison’s comedy was loud, it barely hid a world of pain going on in the man’s heart. Argir’s music isn’t funny, though, so it’s almost all about his internal pain. It may not be pretty, but it’s always honest. Saying he’s no pushover may just be wishful thinking because this album is the sound of a man that’s been pushed around – a lot.