If you want to understand an artist, take a look at her personal space. In the clip for “Promnesia,” singer, songwriter, and video director ck outlaw welcomes us into her house. Everything we see there tells us something about her and deepens our appreciation of her song and her work. That hideaway of hers is unusual: it’s creatively appointed, filled with striking furnishings and intriguing decorations. There are motivational posters on the wall, vintage comic books on her desk, and quartz crystals on the windowsill that testify to her spiritual awareness. In short, this is the abode of an iconoclast – a woman who thinks differently, lives fearlessly, and who has developed her own style. 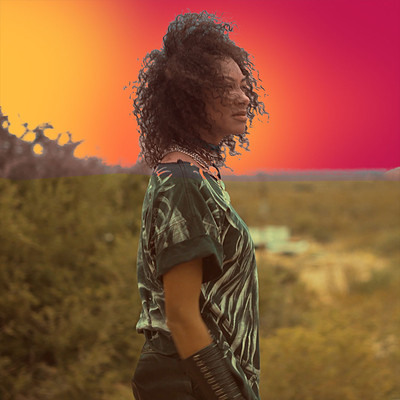 There’s also jewelry sparkling on the table. Those light-catching crystal pendants are the work of Aether 79, ck outlaw’s fashion company. The artist’s necklaces are ck outlaw’s whimsical and abstract take on the traditional hip-hop chain – and many rap or rap-adjacent performers have worn them, including Rihanna, Ro James, Chynna Rogers, and Kiesza. Her music, too, is deeply rooted in hip-hop, but it incorporates elements of hallucinatory pop and late-night R&B. Like everything about ck outlaw, it’s an expression of a unique personality that can’t easily be categorized.

“Promnesia” is also an unusual thing, but we reckon it’s something you’ve experienced. It’s the scientific term for the irrational feeling that you’ve done, or been, somewhere before. For ck outlaw, it’s a perfect description of the recursive nature of the romantic relationship she’d found herself in: one with frequent explosive breakups and white-hot erotic reconciliations. A relationship like that can be exciting, but it’s wearing too, and ck outlaw has poured all of the fury, desperation, regret, and longing into her song. Over a thumping hip-hop kick and a skittering trap snare, ck outlaw sings her story and makes all of its pain and passion manifest.

The clip for “Promnesia” doesn’t tarry long in ck outlaw’s hideaway. One minute into the video and the star is out on the road, in the passenger’s seat of a charcoal gray Chevy convertible, with a sexy and swaggering woman in shades behind the wheel. They’re heading to the city of Tombstone, Arizona, where their interpersonal drama plays out in front of a backdrop provided by one of the most colorful and authentic Old Western simulations anywhere in America. Is a shootout – perhaps metaphorical, perhaps actual – bound to happen?