Straight out of Brooklyn, Makes My Blood Dance is as wild, diverse and, yes, insane as the County of Kings. Anyone can take Disco, Glam, Electropop, and Metal, throw them in a blender and call it a song. It takes some kind of twisted genius to make that kind of molotov cocktail into something that you won’t stop listening to, and can’t stop moving to. Singer Evan Russell Saffer and guitarist/synth player John Polimeni are the minds behind MMBD, with bassist Alexander Nikitin and drummer Carlos “CK1” Guidera as their fellow inmates running the asylum. The four make mayhem that beckons from a dark alley – damn if “Sick As Our Secrets” doesn’t sound twice as alive as half of what’s out there.

This one drips with Sunset Strip swagger and tight New York City grooves, and amidst the chaos, there’s a message of hope. We’ve all got secrets, so we’re all a little sick. The good news is, we’re not alone. There’s a punk rock camaraderie here, with razorblade guitars and cymbal-splitting drums spitting in the face of anyone who wants you to dwell on your damage. Judging by Saffer’s vocal shrapnel and socio-political lyrics, the world’s having a rough time, but that doesn’t mean we have to as well. For all of the song’s scattershot influences, these guys somehow keep it on the rails and even make it radio-ready. A big assist goes to mixer David Ogilvie, who knows a thing or two about unleashing a beast of a song in the studio. His many credits include like-minded life-threateners like Skinny Puppy, Rob Zombie, and Marilyn Manson. Nervous? Good.

“Sick As Our Secrets” is the title track off the record, and they’ve done this rocker right. They’ve struck gold twice now with tag team producer/writer Evan Russell Saffer and director Derek Soto (Sinestra Studios) at the helm. The quartet is in their natural habitat — a dingy rock club. Probably one of the many they regularly darken the doorstep of as they tour around the Northeast. A girl writhes seductively while a crew of misfits h 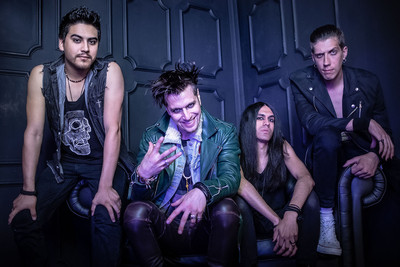 angs out in the mens’ room, because duh, this is a rock video. You get a taste of MMBD’s killer live show, with each member playing as if their lives depended on it. When the guys aren’t melting the faces of their rabid fans, there’s an eerily timely narrative going on. An alienated, misunderstood everydude walks away from a prison-like home and sets out to do… what? Looks like nothing good. But the band’s message of unity and acceptance plays out here, as he finds his people. Bands like Makes My Blood Dance kill it because they mean it – just check out the video.