Calling an album Keepin’ It Country, Vol. One, makes a statement from the get-go. With only a few words, this title separates its contents from a lot of other country music, which is not ‘keepin’ it country.’ Therefore, this album is introduced as not just another album featuring more of the same non-country. Instead, it is country music aimed at fans of authentic country sounds. 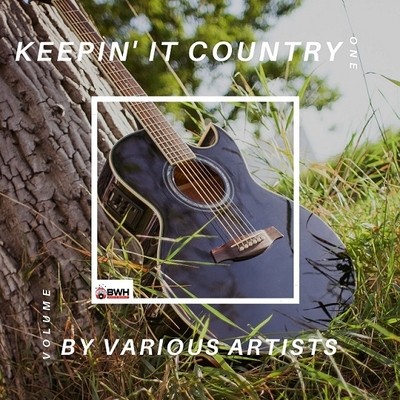 Although not explicit in the album title, this is also an album from 17 different independent country artists. It makes sense these artists are independent because the major labels are mostly interested in what sells well, and what sells these days is oftentimes country music that sounds a whole lot more like rock and pop.

Nearly half of the performers on this collection are women, which also makes it significantly different from what’s happening in Nashville these days, where so few of the artists getting played on the radio are women. If country radio looked and sounded like this album, it’d probably be a whole lot better.

Highlights include “Every Bartender In This Town Knows My Name” by Frank Migliorelli & The Dirt Nappers. It’s an upbeat track, which includes plenty of steel guitar. It’s also a perfectly named country song. If every bartender in a town knows you, not just by your face, but by your name, you may have a drinking problem. The album’s best track, though, is “Bad Love Pain” by RW (Ray William) Roldan. It has an unvarnished, raw quality that reminds you of great Texas singer/songwriters, like Guy Clark and Steve Earle. He performs like a latter-day country outlaw, which is a welcome trait.

With a vocal sweetness akin to Martina McBride, Kate Magdelena sings a song about homelessness with “Streets of Any Town. She’s said the song was inspired by a conversation with a homeless man in Nashville. The song is gentle and empathetic, and was produced by Billy Smiley, who was with the Christian band Whiteheart. Billy Ray Deiz’s sings a working man’s blues with “Workin’,” which, though simple, makes the statement of how many of us need to work, and work hard, just to feed our families.

Although it may not be the country-est song on the album, Natalie Jean’s “What Would You Do For Love?” is significant, as it features a black, female vocal singing it. There have been a few popular black male country artists – Darius Rucker being the most obvious recent example – but there hasn’t really been a famous black female country star – yet.

This album offers a timely reminder that there’s more to contemporary country music than what gets played on the radio. What is heard over these radio waves is but a small sampling of what’s being written and recorded. Not all country singer and songwriter are trying to make pop-country or ride the bro-country train. The most of these tracks hearken back to traditional country music roots, which gives us hope for the future. Artists like Jon Pardi and Luke Combs are doing much to bring authentic country music to the radio. Perhaps those two are paving the way for the folks on this album.