A light acoustic groove is waiting to greet all who press play on the first track of Leo Harmonay’s new album Naked Rivers, “Patterns,” and while this opening salvo hypnotizes us with its charming melodies and homespun harmonies, they’re just a taste of what’s to come in the next nine tracks on this stately sequel to 2018’s Lharmonic. As the instrumental fire of “Patterns” comes to a close, an exciting exercise in evocative string play forms out of its ashes in “Labor Day,” a pristine ballad that adds the exquisite tonality of a piano into the mix and sets us up for the countrified “Best Mistake” better than any other composition on this record could have. 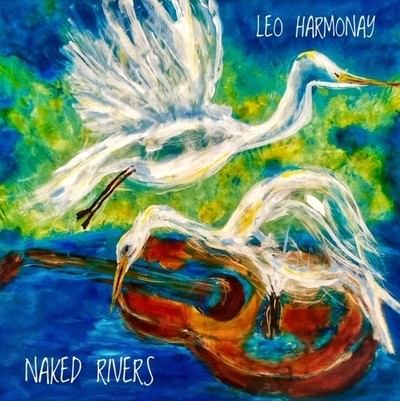 “Best Mistake” has a strong Americana bend to its verses, and when juxtaposed with the dark “Lucky Guess,” is definitely among the brighter numbers in Naked Rivers’ first act. “Lucky Guess” is simple in every way, but due to its sharp vocal delivery feels like a complicated symphony of emotion and elemental melodicism. Its humbling harmonies bleed into “Contours” and, to a lesser extent, “The Ballad of the Unknown River Driver,” which I regard as the best song Leo Harmonay has ever performed. There’s so much pain in his vocal here, so much anguish, and the implication of a catharsis that is – for him – impossible to reach in this moment. It’s transcendent, opulently unvarnished and suggestive of what Harmonay has been striving to capture in the last few albums that he’s released; a total, untainted connection with the audience.

Naked Rivers starts to get a little harder to categorize by conventional genre standards as we get into “Broken Cup” and “Lost Summer,” both of which skew alternative rock-style melodies with a traditional, guitar-driven folk tonality. Enlia’s guest vocal on “Lost Summer” absolutely makes it one of the standout tracks on the LP, if for no other reason than the harmonies that she contributes to the song, but I probably would have made it the closing number on the disc. The title track is a fireworks-display of rock fretting and country-folk grinding behind the mic, which might have made for a more riveting introduction to the record than “Patterns” did (though I could understand if Harmonay was intentionally trying to build up the tension ahead of its fiercely galloping guitars).

The nimble “You and the Sun” brings everything full-circle to where we once began with “Patterns” in Naked Rivers, and as its velvet-soft harmonies disappear into the darkness from which they first came gliding some forty-seven minutes earlier, trying to shake the lingering beats and tidal wave-sized melodies of the past ten tracks from your mind is about as hard as trying to get a mustard stain out of a white t-shirt. Leo Harmonay has written more than a few touching ballads, but what he’s submitting here in Naked Rivers is a game-changer not only for himself but for his scene. He has trimmed the fat from his sound, found his compositional essence and released an album this August that is definitely worth writing home about.