Born in Mexico, psychedelic baroque pop artist Cesar Saez has created a new genre by fusing romantic and melancholy tradition with modern rock-n-roll soundscapes. Currently living in Los Angeles, Saez is a troubadour stolen from a different era bringing his groundbreaking sound with him. 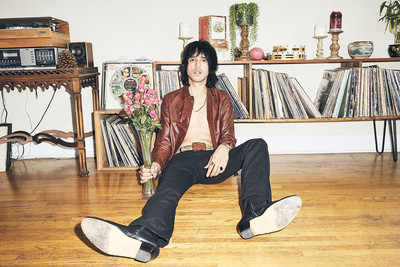 Growing up in Mexico City, his Bolero influence came from watching his mother’s partner serenade her with Bolero after dinner. With flowers between his teeth and a unique swagger Saez began to see the power of romance that stemmed from the Bolero sounds. He soon learned to play the guitar and submerged himself into the traditional stylings of artists such as Pedro Infante and Agustin Lara. Moving to Los Angeles as a teenager, Saez had a flood of new musical influences that impacted his own sound. Ranging from Radiohead to Scott Walker and Serge Gainsberg as well as the 60s pop icons his dad would play for him, Saez took this wide variety of influences and crafted them into the psychedelic baroque pop that he is now known for.