The things that Les Stroud shows us in the gorgeous – but frequently graphic – clip for “One Giant Farm” aren’t always easy to see. That, Stroud might argue, is the whole point: we need to have an honest conversation about the fate of our oceans, and when we do, we’re going to have to face some troubling truths. He’s been ringing the alarm about the degradation of the planet’s ecosystems in songs that are hard-rocking and powerful. It’s all been part of the same lifelong effort to entertain, inform, and educate – and not always in that order. 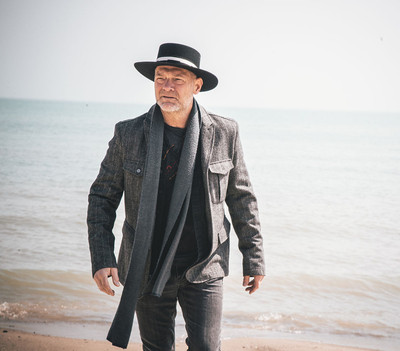 “One Giant Farm” – the single from the upcoming Mother Earth album – is thunderously impressive. Everything about the track is undeniable, and that includes Stroud’s wearily pugnacious vocals, the stinging guitar solos, and the song’s powerful message. The planet, Stroud argues, is more than just a hunting ground for humans: its creatures deserve to be treated with dignity and respect. Legendary rock-and-roll guitarist Slash was so moved by the mission that – wanting to help bring awareness – he played guitar on the track.

As every responsible Earth citizen knows, the oceans are being polluted and overfished at a remarkable and unsustainable rate. The “One Giant Farm” clip – which was directed by Les Stroud himself – shows us the dreadful consequences of our runaway appetites. He takes us aboard fishing boats where the intelligent, charismatic animals of the sea are slaughtered without compassion, and shows us red tides of carnage where hunting proceeds unchecked. Always the teacher, Stroud flashes facts in bold white lettering underneath this footage – facts that are almost as unsettling as the images of sharks shorn of their fins and cruelly cast back into the water. But Stroud is no defeatist. The “One Giant Farm” clip also celebrates organizations and individuals who are fighting to save the oceans, including Dolphin Project and Sharkwater Foundation documentary filmmaker Rob Stewart, and Sea Shepherd. To that list of champions of the sea, Stroud can add his name. Stroud has put in the effort to raise consciousness. Now, we hope only that his warning is heeded.