Credited on his Soundcloud page as either being based out of or hailing from Quin, Ireland, Evan O’Malley’s musical output under the moniker Martian Subculture bears the marks of an unique artistic vision like few others today. Martian Subculture’s latest single “All Emotions Are Equal” is his latest single for a project first taking shape in 2017 and results from the same exploratory creative process that produced previous singles and four EP releases. O’Malley employs lo-fi mics, cassette players, and multi-effects pedals to flesh out his musical ideas and songs emerge from his experimentation. Those songs are uniformly modern and never embrace the retro attributes we so often hear from presumably young songwriters who are presumed to be working on the cutting edge of modern music. 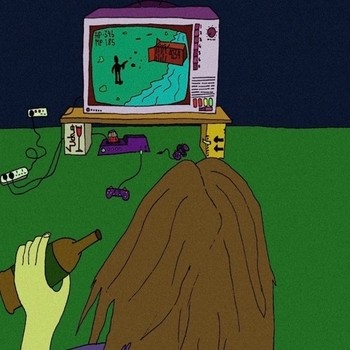 Do not assume, however, that O’Malley abandons traditional instrumentation or that this single sounds like he recorded it in a garage. “All Emotions Are Equal” has appealing professional polish without sacrificing ever elusive authenticity. Definitions are important when discussing that latter term in the context of O’Malley’s music. It has the recognizable shape of pop music, including customary instruments, but there is nothing about how “All Emotions Are Equal” suggesting he is pandering to audience’s expectations – he satisfies himself first and foremost and hopes the listener will follow along. There is no question it is laden with some of the effects O’Malley likes to use in his songwriting, but the wiry and disjointed guitar generates nervous tension juxtaposed against the drumming. The percussion opens the song in muscular fashion before settling into a steady groove and the bass locks in tight with its persistent pulse.

Despite the light unsettled quality of the arrangement, “All Emotions Are Equal” has coherent yet suggestive lyrical content. It has undoubted personal meaning for O’Malley – there’s an intimate aspect about his songwriting suggesting to me he never writes far from personal experience – but he wisely never spells anything out and leaves listeners to discover their own meanings. His emotive vocals will not bowl listeners over with sheer lungpower alone, but that isn’t what this music is about. O’Malley, instead, plays to the song’s strengths and atmospherics. He keeps his artistic vision focused for the full song. There are no diversions, needless adornments, or even a hint of self indulgence. It runs a little under three minutes and embraces an economical approach from first note to last.

The latest single from this Irish singer/songwriter further establishes his credentials as one of the most idiosyncratic musical artists on the indie scene today. “All Emotions Are Equal” is never so alien to our listening experience that we struggle to establish a connection to the track, but it does exist in a world of its own while still bearing familiar hallmarks of popular song. His music has such a pronounced signature quality and sound it is unlikely O’Malley’s Martian Subculture will experience any degree of mainstream success, but I doubt he cares. Let us thank the music gods for that and wait for his next release.