Slowly but surely, a charming acoustic guitar comes slinking out of the shadows in “Eu Vim Da Bahia,” the brand new single from acclaimed Latin jazz newcomer Integriti Reeves. There’s nothing menacing about its euphoric melody, and yet its amiable disposition is rife with an underlying emotionality that will soon be further explained in a graceful lead vocal from Reeves, who pulls out all the stops in this song to put us in that highly-desired summer mood. The harmonies are nostalgic, as is the bass line’s gentle sway, but the spicy structure of the verses makes “Eu Vim Da Bahia” immediately recognizable as the handiwork of a young musician who isn’t as concerned with replicating her influences as she is building on what they left behind. 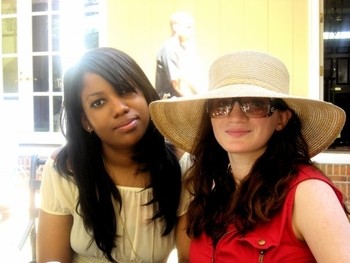 The first stanza has a rather reflective tone to it, but the improvisatory nature of the guitars makes the song feel very off the cuff, unrehearsed and wildly spontaneous. The freeform construction never devolves into scattered nattering set to a gilded groove, but it does boast a certain amount of whimsy that I haven’t heard in a mainstream jazz track for years. “Eu Vim Da Bahia” is a very literate composition, with all of the right ingredients to engage its audience on multiple levels while steering clear of ambient accentuations that would make it generally inaccessible to anyone other than Latin jazz aficionados. There’s nothing volatile about its experimentalism, but it’s definitely different from what you’ll hear outside of the jazz underground this summer.

Right when we’re least expecting it, the central hook in “Eu Vim Da Bahia” comes slashing through the even-keeled rhythm of the drums and pulls us as close to Integriti Reeves as possible for a reverent climax that isn’t as theatrical as it is sensuous and unassuming. There have been a lot of jazz and crossover pop singers trying to create a sound similar to Reeves’ in her new extended play Stairway to the Stars, but few – if any at all – have been able to cut something even slightly as languid as this piece is. She’s self-conscious in her lyrics but not the least bit shy about putting all of her feelings on the table in this song, which in itself sets her work apart from the cryptic content that her major label brethren have been releasing in the last few years.

“Eu Vim Da Bahia” concludes with a haunting rattle of the maraca, and though it’s a rather short song – coming in at just three minutes and seven seconds in total length – its catchy harmonies leave an impression that will bring listeners back to the track time and time again. I never know what I’m going to hear when I get ahold of a debut single, but every once in a great while, an artist like Integriti Reeves comes along and makes the entire process of creating an original, contemporary pop song look incredibly easy. “Eu Vim Da Bahia” is Latin jazz for the most discriminating of music buffs, and it’s making a big splash for its skilled songstress this July.