REVILUTION is a heavy metal, hard rock outfit hailing out of Riverside, California. Their live show is creating a strong buzz in the LA scene. We caught up with the band to get the details on what keeps them rockin’ strong. 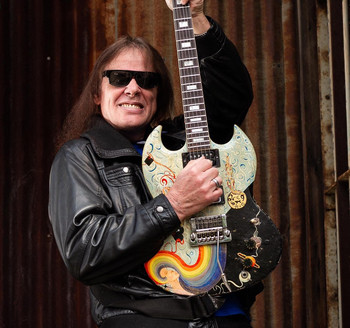 Hey REVILUTION thank you for joining us. What’s the most exciting part of being a working, LIVE rock band.

Scott Flint, guitar, vocals: The positive vibe you get from the audience.

Marie B, vocals: It’s exciting and gratifying to see audience members get off on the music we perform. For years it felt like only a select few were even willing to listen to it. So to perform it in front of an audience who is having a good time with the show is a great feeling.

Dan Seitz, vocals, guitar: The fact that people are getting off to original music that we wrote is the best part for me. I played in cover bands before REVILUTION, and of course everyone likes to hear Pink Floyd or Red Hot Chili Peppers tunes; but that just felt like copying someone else to me, and every cover band plays the same stuff. I’ve never been big on doing what everyone else is doing, I like to be different, original. To see people enjoy what our band created, there’s just nothing better than that.

Any personal favorite standouts from your new EP?

Dan: My personal favorite is “Phantoms.” Most everyone else likes “Bastard,” but I always thought “Phantoms” was a bit more sophisticated musically and lyrically. But I think people enjoy “Bastard” more because they can readily identify with the subject matter. Which is fine with me, I just write what I feel at the time, and “Bastard” is just as honest as “Phantoms.”

Scott: Bastard is by far my favorite.

Marie: My favorite song off the EP is Bastard. It’s got a fun music video and you can’t help but party hard when you hear that song. This is a picture of the train I danced on in the music video with no safety features. It’s a totally real train. Dan made the smoke special effects by hand at the beginning of the video. Also totally real. He didn’t know if he would be able to get it lit and then it lit and set the other one off next to it so hella lit! Ha ha! It went better than planned.

How long were you in the writing and recording mode with this project?

Scott: I was only involved in the recording mode of the EP, I didn’t write the music.

Dan: The songs on the EP were written several years ago originally; “Bastard” in 2012, and “Face Down” and “Phantoms” in 2014. When we first starting talking with Ricky Brewer (producer on the EP), I sent him everything we had recorded from 2011 to now. He picked those three songs to re-record, so we spent a few weeks rehearsing the new arrangements, then spent six days in Denver recording, mixing and mastering them.

Marie: Since there was no new music on it all the band had to do was learn the songs, go to Denver and record, mix and master record it so…like a few months I think?

Were you an integral part in the production process as well?

Scott: Yes I was.

Marie: Yes. I’ve been ears for all the bands albums. Dan depends on my ear because I hear differently than others, so my ears lend a subtlety not commonly found in modern recording.

Dan: We all were. Ricky came up with some arrangement ideas, I added an idea or two, then we all stayed for the process beginning to end.

Will your long term fans be in for any surprises with the new music you guys are currently working on?

Marie: Yes. I think we are facing different challenges this album which will change the sounds. Plus we are more experienced now that we have a few under our belt. I couldn’t say there are more arpeggio sweeps in it because it’s not written yet but with us you never know until it’s the final recording.

Dan: It’s going to be a bit more diverse than what we’ve done in the past. So far we’ve only recorded stuff I wrote on my own or with Marie, but Scott has his own songs and style and influences, which are a bit different than mine. I think that when we put all that into the mix, it’s going to be next-level.

Marie: I think once we finish the new album we will know more about touring.

Scott: We plan on touring behind the new album when it’s finished.

Where can we find you online?