The single “Open My Mind” begins with the repeated line, “I want to get away.” It’s not that Southwest Airlines commercial advertising slogan, however. Instead, it’s a lyric sung urgently over a driving, Ramones-esque guitar riff. 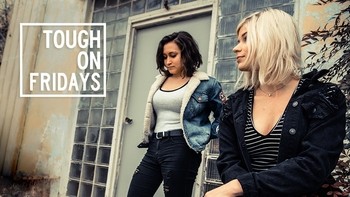 Tough On Fridays is an unusual female duo from Georgetown, Texas. Female duos aren’t especially unique, as Indigo Girls have had a relatively long and successful career together. However, a pair of women that rock has hard as Tough On Fridays do is a beautifully rare thing, indeed. This duo points back to influences that include Green Day, Paramore and Nirvana. The duo formed in 2017, and “Open My Mind” is the lead-off single from its EP Lost & Found.

They also sing, “I am lost and I want to be found,” which echoes the EP’s title. The song is short (and not always sweet) at 2:31. They wonder what this other will find, if only one day this person opens her mind. It suggests that another appreciates only her physical attributes, but not her mental abilities. It’s a fascinating perspective. Normally, when people talk about open minds, they’re referring to having an openness to new ideas. ‘You need to have an open mind,’ they suggest, sometimes when introducing a new topic. This song’s message, however, views a woman’s mind as a sort of treasure box; one that remains closed and unexplored.

“Open My Mind” uses a basic and direct approach. It gets right to the point, right from the start. It also opens with powerful energy, which never lags. To reference the Ramones again, this song has no guitar solos (or instrumental solos of any kind, for that matter). This places all the focus on the lyric’s message, and the delivery of said message. One of punk rock’s original goals was to create music without all the album-oriented rock trappings. One of the inherent flaws of what is now termed ‘classic rock,’ is a tendency to overdo instrumental solos. Guitar solos, for instance, that go take up more of a song’s time than its words. Or worse still, the never-ending drum solo. Early punk acts did away with these unnecessary elements, and immediately got to the meat of their songs. These songs excluded any and all aural distractions. Similarly, although Tough On Fridays are talented musicians, this act’s songs don’t have time to waste on indulgent instrumentation.

Yes, as the song’s title suggests, this track is all about opening the mind. However, the sound of it is more about getting straight to the heart. This is music to be felt, more than to be pondered. Tough On Fridays wants its listeners to have a physical reaction to its sounds. To that end, Tough On Fridays succeeds. “Open My Mind” is a smart sort of ‘thinking out loud’ song about a hitch in a relationship. There was a popular PSA years ago with the slogan, ‘A mind is a terrible thing to waste.’ This was an anti-drug message. Similarly, one could also say that it’s a waste to leave any mind unopened. That’s what Tough On Fridays is saying with “Open My Mind,” and these smart women are right about that.