Amidst a wash of synths, the song begins. For thirty seconds, the signal ebbs and flows, suggesting the tidal tug of ambient music. Then an electrofunk bassline begins, and “Ricochet” snaps into focus: suddenly it’s as danceable, propulsive, hypnotic, irresistible as any pop hit. Yet the voice, when it comes in, isn’t that of a pop singer – it’s got way too much personality for that. It’s high, urgent, confident, slightly unearthly, redolent of glam and playful indie rock. Right at the two-minute mark, organ chords impart classic rock grandeur to the track. Sixty seconds later, the mood changes again. A deliciously skronky guitar is introduced, and it scrawls all over the mix. The synths fade out, and we’re left with distorted six-string over a live drum kit that could have motored along with a garage classic. 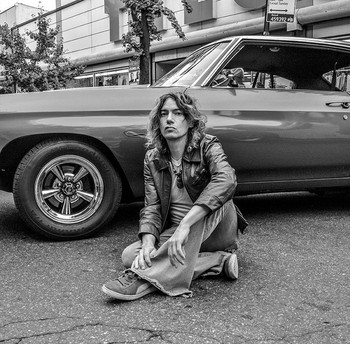 This four-minute journey from meticulously manicured electronic soundscapes to loose, organic, squalling Downtown guitar-rock (with many exciting stops along the way) is brought to you by one of the most imaginative guys left in New York City. Nick Vivid is a local rock star, yes, and a celebrity south of 14th Street; more than that, he’s a master of sonic texture, a craftsman with the soul full of disobedience, and a visionary, risk-taking recording artist. He’s also something of a philosopher too: “Ricochet” turns on a statement of purpose that doubles as autobiography. “All that matters is I came back,” he tells us, “no matter what it took to get here.”

That journey he’s alluding to has been a long and fruitful one. Nick Vivid may look young, but he’s been involved in the New York music scene for many years – years during which he’s appeared on many of the city’s most storied stages, honed his craft as the engineer and producer in the town’s studios, and tried his hand at pop, rock, funk, hip-hop, electronic and experimental music. Blissed Out, his latest full-length, is a record of those travels, and it presents Nick Vivid as a musician of uncommon versatility, vision, and skill. Hear a chorus of his, and it’s a cinch you’ll be singing it to yourself for a week, at least.

The clip for “Ricochet” might seem superficially straightforward. But as is true for Nick Vivid’s song, the video manages to pack a surprising number of ideas into its short running time. Everything you need to know about this essential artist is visible here: his swagger and his relationship to the beat, his sense of style, his relationship to his city (it’s shot on a concrete playground), his creative restlessness, and his devotion to his craft. Just as the song changes, the video does, too – the shifting moods of “Ricochet” are approximated by alterations in lighting and camera angles. Nothing stays steady, but everything feels right.