Publicity photos of Katy Vernon are a little deceptive. She’s a pretty woman, sitting with a ukulele in hand. Therefore, one might rightfully expect her music to be stripped-down, old-fashioned ukulele-centered music. However, Vernon’s album, Suit of Hearts, is quite a different thing, indeed. 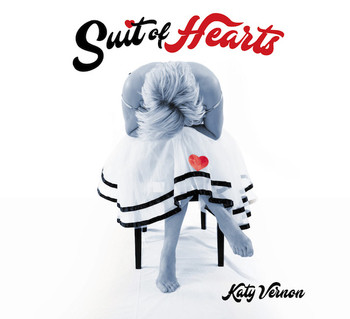 The album opens with its title track, which bursts out like an 80s U2 anthem. It’s not just a cute girl merely strumming her ukulele happily. Instead, it’s a full-bodied arrangement, featuring Spanish-inspired acoustic guitar strums and a horn section worthy of Johnny Cash’s “Ring of Fire.” The song includes a lyric filled with words of empowerment and encouragement. Vernon asserts that, even though a person may not save another’s life, a life well-lived is still a worthwhile goal. “Life is what happens,” Vernon quotes John Lennon, “when you’re busy making other plans.” Along the way, there’s even a slide guitar solo. Thus, Vernon opens her album with a bang.

With all the joy exuded through her music, you’d never easily notice how Vernon has had a difficult life. She lost both her parents young. Writing songs was one therapeutic way Vernon dealt with her loss. She’s originally from London, but after meeting her future American husband on a train from Amsterdam to Berlin, she settled in St. Paul, MN.

One song titled “Listen” is given two distinctly different renditions. One, titled “Listen (Strings And Voice Mix)” is just that, nothing more than Vernon’s ukulele, a string section and the artist’s vulnerable vocals. The other version is similarly transparent, but also includes a more solid rhythmic part with its drum fills.

“Pink Cloud” is the album’s most joyous track. It’s an upbeat declaration of happiness. In our increasingly cynical times, Vernon’s overt thrill with life is so refreshing! The song includes cool organ and electric guitar solos. “It feels so right not to feel so wrong,” she gushes. This is the song to play when you wake up with the blahs. Even one song that faces personal struggles, called “Undertow,” leaves the listener feeling comforted and hopeful. It’s a slower, quieter number than “Pink Cloud,” and includes some nice steel guitar.

“Somebody’s Daughter’s Daughter” is one of the album’s more stripped-down songs. It features nice, twangy electric guitar work. Best of all, the song’s few other aural elements bring out the lovely quiver of Vernon’s vocal.

The only song that doesn’t seem to fit quite right is “Christmas Wish.” Its jubilant vibe fits with Vernon’s musical approach, but a Christmas song, on an otherwise non-Christmas release, is just a fish out of water. That’s likely why she put it at the end of the recording.

It’s rare to come across an album so consistently delightful. However, ‘delightful’ is the only appropriate word to describe Vernon’s Suit of Hearts. Yes, she could have easily become a blues singer, based upon her difficult familial upbringing. But she didn’t. Rather, she’s one that’s learned to find joy, and expresses this joy through music. Besides, blues music and ukuleles don’t go together well. Never have, never will.

If Katy Vernon’s Suit of Hearts doesn’t put you on a pink cloud, it’s likely nothing will.