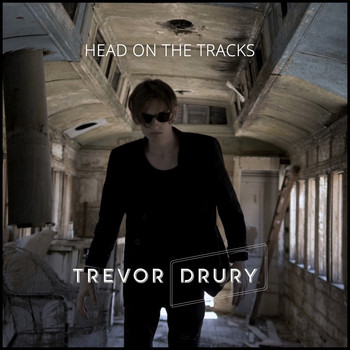 If you follow the underground sound, then you already know his name. Trevor Drury has been cutting one smash after another lately, and if you thought that you had heard the very best of this soulful singer’s material, you’d better think again – for his new single “Head on the Tracks” is making a big splash this season, and bringing new disciples to his growing fan base in droves. In “Head on the Tracks,” Drury dishes out some lusty emotional grooves and more of that tuneful timbre that has had critics desperate for a new LP to follow The Start and pop enthusiasts singing his praises from one side of the country to the next. His career is catching fire, and at this point, I don’t know if anything could put its wild blaze out.

The tempo in “Head on the Tracks” creates a lot of tension as we work our way through the opening verses and eventually reach the chorus, where in one fell swoop, Drury washes away the anxiety of the churning rhythm in a climactic serenade. His godlike command of the lyrics is only rivaled by the enigmatic expressions of the instruments, which are presented to us in the master mix free of any unneeded varnish. The structure of the song is steeped in a streamlined style of indie pop, but that doesn’t smother any of the organic tones that the piano and accompanying string melodies have to give us. Drurywants to stimulate all of our senses here, and as he has in the past, he gets exactly what he wants by the time this single has come to a stop.

Everything in the mix is really crisp and clean, but at the same time, the piano growls with a petulance that adds a rebellious edge to the main melody. The vocal track wraps around the keys in a beautifully well-bonded cadence, and when we strip all of the different components down and isolate them from one another, only the drums are as physical a force as the harmony between Drury and the piano is. This is one of the tightest arrangements I’ve heard this year, but it’s produced in a way that doesn’t sacrifice any of the subtle details in the song’s sound profile at all whatsoever.

Trevor Drury has become one of my favorite singers since his debut, and that’s only partly because of his amazingly gifted singing abilities. Drury never talks down to his audience; he never tries to play to the emotional status quo, nor does he ever intentionally circle a subject in an attempt to relate to the masses instead of the minority. His music is all about getting down to the nitty gritty and exposing the feelings that often end up being the most neglected and difficult to articulate in our day to day lives, and with “Head on the Tracks,” he continues his bold melodic journey into our hearts without showing any hesitation in doing so. I love what he’s doing with his work at the moment, and I’m more than confident that he’s only going to get better with time.