Here are three undeniable truths: age is not your friend; working in an office kind of sucks; and shot-gunning beers and amateur knife-throwing with a terrifying demon who is super rad, and also probably from a distant planet, will chase away the blues. The clip for Quinn Henry Mulligan’s latest single “Older” provides video evidence. It’s two dudes pulling shenanigans on a trippy evening’s journey, cutting through back alleys and front yards to the corner watering hole: escape and slow-dancing await. 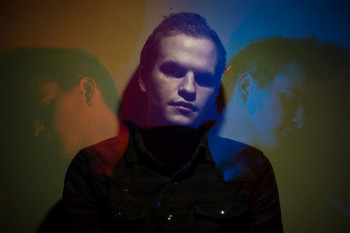 Mulligan plays a cubicle-bound office drone who tries to audiobook his way out of generalized workplace anxiety – but no dice. Judging by his dead eyes, he’s done this, oh, at least two hundred times. They say that the definition of insanity is doing the same thing over and over again, but expecting different results. Another meaning of insanity is hallucinating a green, fanged and bewigged Party Monster in a clingy silver bodysuit with angel wings. But if that’s what it takes…

A few years ago, Mulligan was neck-deep in an existential crisis. His band, the popular PDX mainstay Fanno Creek, had called it quits, and he asked himself if he was even a musician anymore. Big questions require big answers. Luckily, he was getting porch-drunk with his twin brother, the video’s director, who suggested that writing, recording and releasing an album a month for a year was the right way to go. “Older” is one of the standout tracks on that series’ May.

Mulligan sings a song of regret and purposelessness, belted out to make amends to a former lover and/or his bygone, better self. It’s his restless musical spirit at its best. He’s got a head full of Folk, Rock, Psych, and Indie that he effortlessly combines to tell simple yet resonant stories about the easily overlooked triumphs and tragedies of everyday life. Here, a melancholic acoustic intro opens up into crisply layered, crescendoing pop reminiscent of The Flaming Lips’ or Bowie’s outer-spacier stuff. It’s joyous and heartbreaking all at once.