Meghan & Caitlin is a youthful duo that describes its music as acoustic indie pop. “Midnight” is a gentle love song of sorts, mainly built around a simple, repeated keyboard line. When percussion enters the mix, it sounds like a choir of handclaps. 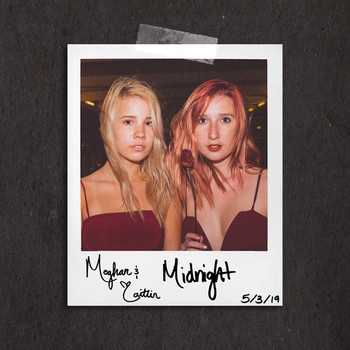 It’s a love song, only it’s also a little complicated. This girl has feelings for the guy, but he seems a little too focused on her being little more than a friend with benefits. She feels like he sees her as a booty call, but not someone with whom to have a lasting relationship. She, on the other hand, is longing for a sustained partnership. Toward the end of the track, the groove slows down, and keyboard is replaced by acoustic guitar.

This track’s lead vocal has a jazzy, quivery affected tone. Although the duo self-describes itself as ‘alternative,’ this song’s singing, at least, sounds a lot like many of today’s more popular pop vocalists, including Dua Lipa and Halsey.

The song’s sentiment actually goes way back. The Shirelles recorded Gerry Goffin and Carole King’s song, “Will You Love Me Tomorrow,” which similarly described a couple where the man was all lovey dove-y under the moonlight. However, the girl was left wondering if he’ll still act the same way come morning light. Will he still love her tomorrow? It’s left as an open question.

Dating culture these days is so complicated. The taboo of no sex before marriage has long since passed away. However, the ‘me too’ movement has led to a lot of confusion. Is it okay to make that romantic move? Should a guy take a moment to ask permission before moving forward? The free love of yesteryear now has a price.

Furthermore, there’s the whole divide between sexual relationships and romantic partnerships. What’s a girl to do when she finds herself falling in love with a guy that only wants her for sex? Does she keep seeing him and giving him what he wants, or does she call it off and wait for someone that feels the same way as she does? That seems to be this girl’s dilemma. You can hear it in her voice. Her vocal expresses the struggle going on inside her heart. There’s no easy answer, either.

The song begins with, “I like you/It’s easy to see why.” This leads one to believe the man in question is easy on the eyes, as they say. Unfortunately, a pretty face doesn’t always equal a kind heart. Not that this is a bad guy, per se, but he’s obviously not ready for a serious relationship.

After the track’s music ends, a man’s voice can be heard saying something non-committal. Maybe they can make something happen, he suggests. This must hurt her heart because she’s well past the ‘let’s make something happen’ stage. The chorus finds her singing “You don’t even know my last name.” which proves her point that he really knows nothing about her.

Although this song doesn’t have a happy ending, it’s nevertheless a smart, insightful look into modern dating. You’re left with the impression these two are about to have a necessary talk, and that they’ll eventually go their separate ways. Better now, though, before this girl gets her heart painfully broken.