A modest guitar picking reverberates into the dark ethers surrounding it. A second guitar’s strum interrupts its homespun harmony, only adding to the textures of expression that this wordless opening salvo of instrumentation is delivering at the start of “Lucky Lucky,” Safe as Houses’ new single. The melody blankets us in a warmth that is surreal and rather spacy at first, but a staggered drum set will ensure that our adventure isn’t without at least some sense of structure. We’re in the palm of this band’s hand, and though they’ve executed some hit or miss jams in the past, this is one of Safe as Houses’ more relatable releases to date. 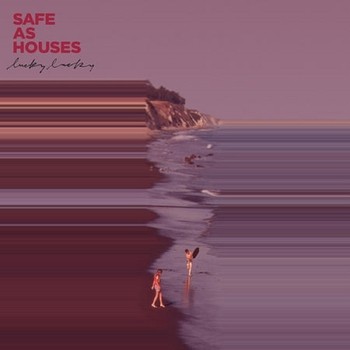 The verses are off tempo with the rest of the track, but this feels deliberate through and through. Rather than lining up the vocal with the guitars, Safe as Houses juxtapose the two as rival elements competing for our attention as we make our way through the waves of melodic rhythm that are constantly being thrust in our direction. The bass in right in the middle of all the discord, quietly heating up the bottom-end of the song with a classic tonality that tethers the hook to the folk-rockers of yesteryear, without totally dragging the track into throwback territory.

“Lucky Lucky” has a chorus that is anti-climactic to a fault, and it kind of threw me off when I first listened to the song and assumed that the chilling ascent in the percussion was building up to something a little more cathartic than what I actually ended up receiving. Does it ruin the glittery groove that the guitars press out at this juncture of the song? No, but if asked what I would have done differently here, it definitely would have involved giving the chorus a lot more horsepower.

The instrumental outro of this single lasts for about sixty whole seconds, and as grand an exit as it is, it has a habit of leaving me jonesing for more from this band every time I consume it. I didn’t know much about Safe as Houses before listening to “Lucky Lucky,” other than the little buzz that I had heard from my friends who are more familiar with the Ontario underground than I am, but I would like to hear more of what they’re making in the future. They’re not as self-centered in their lyricism as other indie folk acts have been in recent years, and that alone sets their work a cut above the rest this season.