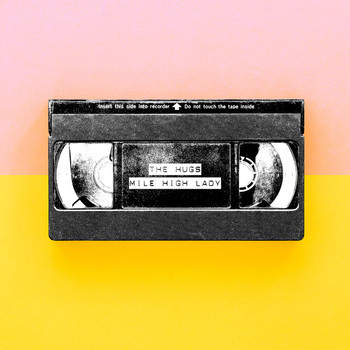 Black and white drumming adorns a full-color bassline as we wander through the first couple of bars in “Mile High Lady,” the new single from The Hugs, and it’s soon met with a funky little guitar part as well. The percussion is a little robotic, but it’s creating a strong framework that will be filled with power popping texture from a vivacious vocal track and an adjacent hard rock riff. “Mile High Lady” isn’t the first hit that The Hugs have had since getting together back in the 2000’s, but it’s one of the most recent examples of their uniquely surreal sophistication, and thus, it’s had critics abuzz from one side of the country to the next.

The music video for “Mile High Lady” is painfully simple by modern standards, but its old school premise actually matches up with the vintage tone of the guitars elegantly. Much like the band behind its creation, this video is all about its crown jewel – the starring soundtrack. Visually, we’ve got a mashup of a lot of psychedelic-tinged imagery that feels like a mixture of press package outtakes, dreamscapes and eccentric imagery that suits the overall experimentalism being utilized by The Hugs in the music. It’s not the most elaborate music video that I’ve had the chance to review this season, but for what it lacks in polished cosmetics and pointless props, it makes up for in with its genuinely DIY finish, which is something that I’ve come to miss in alternative music as the years have gone by.

I might have taken a slightly different approach to the master mix than The Hugs did here, but I think that I’m able to understand what they were going for in “Mile High Lady.” Their last few releases have been a little tinny by comparison to the muscularity that this track boasts in everything from its beefy bassline to the vivacious vocal leading the way at the forefront of the mix, and I get the impression that this was designed to show off their sonic sustain as much as it was their always ear-catching lyrical lashings. There’s more meat on these bones than I was planning on finding, but if anything, that makes me all the more inclined to endorse what The Hugs have done in “Mile High Lady.”

This band has come a really long way in the last twelve years, and this single (and music video) might be their most interesting look so far. Their longtime fans will be the ultimate judge, but I think that “Mile High Lady” is sufficient springtime fodder for anyone with a taste for Brit-pop melodies from the American side of the Atlantic. It’s obvious, to me at least, that The Hugs are nowhere near finished in their creative evolution, but as it stands in the present, their sound is one of the more original in all of the Portland scene – which, if you’re keen on the underground, is not a statement to be taken lightly. I’m always excited to hear new music from these guys, and their latest release does not disappoint.