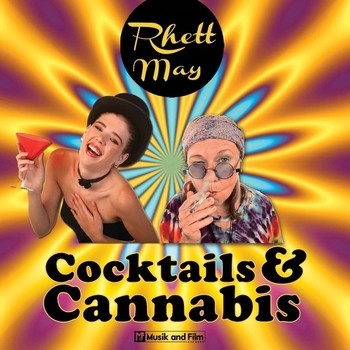 Beats bolstered by a sumptuously raucous master mix come galloping out of the ethers as we find ourselves in the clutches of Rhett May in his new single “Cocktails and Cannabis.” They’re quickly met with a muscle-flexing guitar part that will vault over the rocky rhythm of the drums and hit us with every bit of strength that it’s got to offer. May divvies out the verses in a half-melodic growl that can’t help but evoke imagery of a musician gone mad on stage, getting stoned from the glare of the spotlight and deriving angst out of every smiling face he sees in the audience. He’s confident in his lyrical delivery, but the vocal track isn’t the only swagger-dripping component that we’ll be enjoying in this all-new release from the critically acclaimed solo artist.

“Cocktails and Cannabis” is a pretty slow song when we actually analyze the depth of the rhythm, but it doesn’t play out like a somber single in the slightest. There’s an abundance of blues tonality in the guitars as well as in the tempo of the drums, but it becomes tempered by the cadence of the words when May emits them with a churning sense of urgency as we near the chorus. We ebb and we flow, we grind and we grate, and by the time that we reach the halfway point in the track, it’s almost as though we’ve been through at least a couple of bar brawls that have left us bloodied but unbowed in our quest for righteous riffing.

The lead guitar parts in this song have a light feathering of reverb in the master mix that carries over into the vocal but never interrupts the flow of the lyrics. May executes everything on a dime here, and there’s never a lag in any of the varied elements on the instrumental side of the track. “Cocktails and Cannabis” doesn’t come across to me as a single meant to introduce new fans to his multitalented skillset, but more as a freewheeling expressive piece designed to give us a glimpse of where his sound is going to be taking us next. If this really is a glimpse into what his upcoming releases are going to sound like, then I would have to say that his creative evolution is nowhere even close to plateauing.

“Cocktails and Cannabis” fades to black with a lot less bravado than it starts off with, but that doesn’t prevent its unstoppably catchy hook from lingering on in our minds for hours after we’ve heard the song for the first time. It’s as addictive a substance as its two lyrical subjects are, and while I’ve certainly never disliked anything that I’ve heard bearing the Rhett May moniker, I think that this may well be my favorite song of his collection to date. He’s come a long way since the pulsating pop of the immaculateCalcutta Boy, and I can’t imagine his sensational sound going out of style as we near the end of the 2010s and enter a new chapter in rock music history.