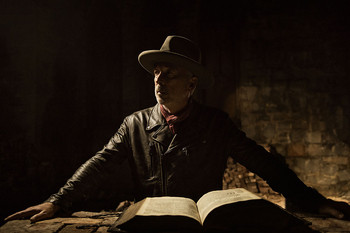 “Feel Me,” the new clip from A Bad Think, isn’t the sort of video to be lightly dismissed. It’s certainly entertaining: vivid, lively, brilliantly animated, and wholly engrossing. But it also turns on an arresting image – an entire theater crowd with virtual reality masks on their faces. They’re otherwise well-dressed and well-heeled and in most respects a conventional audience. Yet they’ve chosen to mediate their experience of A Bad Think frontman Michael Marquart, who takes the stage with a guitar and does his best to reach his compromised listeners. We don’t know exactly what they see in their headsets, or what the precise relationship is between the wild visuals in the video and the scenes playing in the minds of the members of the audience. A few display signals of outward engagement, but most sit still. What’s most alarming about the “Feel Me” clip is how believable it is. How different, really, is this hallucination from our present, phone-enhanced reality?

The video is the latest in a series of provocative, defiantly topical clips from this always compelling alternative rock project. The band has previously worked with the like-minded Derrick Borte, director of the cult film The Joneses, and another artist who has done plenty of hard thinking about where we’re going and what we’re likely to see when we get there. Marquart’s prior videos with Borte plunge the viewer into a parallel world: one rich with symbolic significance and unearthly color. However, these dreamscapes aren’t departures from reality; not exactly. Instead, it’s been an opportunity for Marquart to explore the implications of technology, and take a good long look at the intersections between science and social behavior. It sounds heady, and that’s the sort of writer Marquart is. No matter how thoughtful he gets, he always remembers to bring the rock heat. Savior, the seventh set from A Bad Think, is a double album, and it demonstrates Marquart’s breadth of knowledge and musical flexibility. Marquart’s head is brimming with ideas – and he has the instrumental chops to realize them