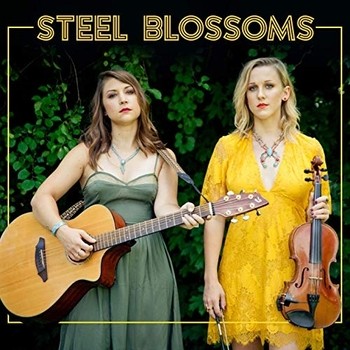 Spindly string grooves slip into focus as “You’re the Reason I Drink” ushers us into Steel Blossoms’ all-new, self-titled album. The poppy swing that drives the rhythm is soon merged with a country-colored melody from the backing band sitting behind Sara Zebley and Hayley Prosser, and we quickly find that trying to resist the urge to shake to the sway of the track is essentially impossible. The positively rambunctious vibe isn’t to last too long here though, as the hollow fiddle that will commence “Revenge” is ready to come roaring into existence just around the corner. In this song, Steel Blossoms take us to the edge of darkness and inside an unforgettable story of suppression and survival that will stay with us long after this record has ceased to play.

“Revenge” is followed-up with the reverent “Trailer Neighbor,” which might contain the most mammoth of all the hooks present in Steel Blossoms were it not joined by the ballad “County Line” in the album’s contents. Though slower in speed, “County Line” is brimming with gravity-altering grooves that act as a vacuum drawing us closer to the melodic center of the composition, and it’s here that Zebley and Prosser really start to let their hair down and see how far their harmonies can take them down this sonic highway. “Pick Me Up” raises the tempo and maximizes the arranged space in which Steel Blossoms will pummel us with their sophisticated singing, but despite its flashy cosmetics, the simple construction of the verses keeps the song from feeling overly virtuosic in execution.

A soft strumming of guitar opens the floodgates to an ocean of homespun harmonies in “Innocent,” and as sensuous as the string play gets in this song, it’s but a drop in the bucket next to the enthralling musicality that our lead singers are sporting in the vocal track. The ‘grassy textures in this tune segue into “You Ain’t Sleeping Over,” but the two songs are stylized differently enough to where you can tell that neither was a last minute throwaway track conceived only to help fill out the LP. “Heroine” stones us with its weighty lyrics and leaves us emotionally battered and bruised as “Killed a Man” starts up, but somehow, Steel Blossoms manages to shift gears yet again in this song and keep us guessing where we’re going to end up in this joyously engaging musical journey.

Steel Blossoms comes to a stop with its climactic final track “Kentucky’s Never Been This Far,” an aptly titled song that summarizes exactly where Zebley and Prosser are at right now in their ascent through the alt-country music hierarchy. In such a short time, these two songwriters have gone from obscurity to underground notoriety, but I think this is going to be the album to finally put them over the top and into the mainstream conversation. There’s definitely no one in Nashville that can contend with their heavy harmonies and riled up rhythms in songs like “Pick Me Up,” and in an era rife where inarticulate prose and jaded synthesized melodies are in an overabundance everywhere we look, this LP is a beacon of hope to fans of real Americana everywhere.