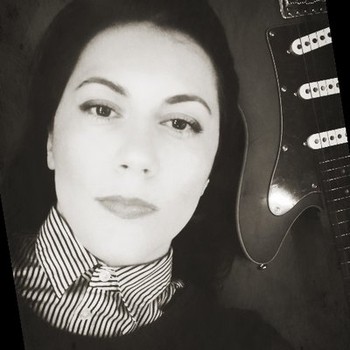 Classical guitar strings pepper an airy rhythm as we descend upon “High in Space,” the first track in Jas Frank & the Intoits’ new album, The Girl from Cherry Valley, and they offer us a glimpse into the beautiful chaos that the record will treat us to in the nine songs that follow. A harmony that feels as ancient as time itself is woven into the fabric of an instrumental melody, and before long, the track launches into straight EDM beats out of nowhere and pushes us into the gorgeous glare of “Human Animal.” In this song, we segue from the introductory fuzz of “High in Space” into the cut and dry grooving that will propel “So Far Away” and its blustery balladry out of our stereos and into our hearts to stay.

“Virtual Friends” taunts us with its ska-style rhythm and assertive folk-rock textures, but it’s only setting the table for the cratering emotionality that will arrive with “All the Highs All the Lows.” In the music video for this single, we look on as a nameless protagonist contemplates love and loneliness from atop of an archaic bridge, only to find that this lowest of lows is leading her to the highest of highs when she gets a game-changing text message from a likeminded light of love. Shot with vivid high definition cinematography, it’s as splendid a visual concept as the music soundtracking it is a graceful depiction of what it is to live amongst the bi-polarities of human relationships.

“In a Hole” has the hollow-point reverb of something that I would imagine hearing in a Quentin Tarantino movie, minus the campy qualities of course. The blue hue in its organic tonality stands in strong contrast with the neo-industrial grooving that plods along in the drum track of “Unlight the Light,” but the two don’t feel like fragmented additions to this already quite eclectic LP. “In Early Mornings” deceives us into thinking that it’s symmetrical structuring of the percussion and the strings will be the only hypnotic element in its four and a half minute-running time, but as we discover in the chorus, there’s nothing predictable about this dark alternative sonnet – nor the songs that it just so happens to be sitting in between.

A slow-swinging pendulum acts as the rhythmic foundation for “When the Rain Stops,” and after spellbinding us in its back and forth opening salvo, it allows Jas Frank & the Intoits to burn off their most cathartic hook in the entirety of The Girl from Cherry Valley. In an urgent emission of funky grooves spiced up with a profoundly rousing lead vocal from Frank, the album comes to a conclusion in its climactic title track, and even as the supple strings and electrified melodies fade into silence, it’s almost as if the echo of their march lingers in the atmosphere long after the music has ceased to play. Cherry-picking from this record’s collection of songs isn’t nearly as astounding an experience as listening to it from beginning to end without anything to disturb the music is, but no matter how you consume this LP’s content, Jas Frank & the Intoits’ debut is inarguably a brilliant acquisition for any inspired rock fan.