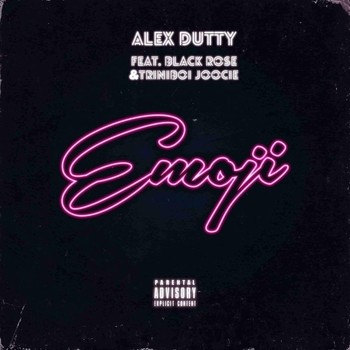 Right from the get-go in the new single “Emoji,” Alex Dutty is spinning us in a hundred different directions with a swirling bassline skewed with acrylic textures emanating from his vicious vocal. The lyric video for the song plays out like a fireworks display littered with the verses slipping from Dutty’s lips in real-time, and despite its intellectual construction, the narrative that the words are attempting to convey is never lost on us amidst the tizzy of majestic tones being vaulted in our direction. The tempo is pendulous and the bass lumbering, but the drums are as light as a feather, seasoning the melody with an agile dexterity that will emphasize the color in Dutty’s voice like no other component possibly could. “Emoji” isn’t your typical rap song, and its composer is far from your typical rapper.

After the opening salvo of muscular musicality finishes discharging its thunderous introduction to the climactic chorus, the pace of the song seems to shift slightly and with an almost jazzy twist to minimize the augmented transition. Dutty’s vocal drops an octave as the seriousness of his tone overtakes the energy in the lyrics, but that isn’t snuffing out the optimistic melody that a chic piano part is generating from a distance. The drums are still attacking us with all the fury of an out of control wildfire blaze, but Dutty is doing his part to keep them separated from the gliding strut of the bass, which has as much swagger – if not a touch more – than his own rapping possesses in this track.

At the 2:02 mark, Black Rose drops in to sweeten the song with her erotic singing style, and the soft timbre of her voice balances out the weightiness of the instrumentation perfectly. There’s never a doubt as to who the star of the show is in “Emoji,” but at the same time, it’s hard to imagine this single without Black Rose’s angelic serenade after listening to it several times and, admittedly, becoming addicted to its gravity-defying grooves. She and Alex Dutty really bring out the best in each other’s artistic personalities in this song, and I think that it adequately spotlights the talents of both performers supremely. The master mix generously affords both vocal tracks a lot of space in the big picture, and while they’re uniquely contrasting on paper, together they make an unforgettable harmony that is reason enough on its own to buy into the hype surrounding this single.

“Emoji” dissipates into the stoic silence from which it first arose in an epic fashion, and as the music escapes our grasp and the lyric video goes black in the fleeting seconds before coming to a stop, the boisterous beats that framed Dutty’s lyrics continue to linger in the atmosphere around us. This is one rap track that will get stuck in your head after a single listen, and though it’s only one of many startlingly evocative and on-point songs that Alex Dutty has released in his career, it may well be his most endearing yet. All in all, I’m quite eager to hear where this bold sound takes him next.