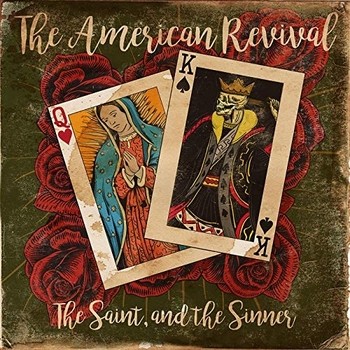 Belting out a sensational vocal harmony studded with acrylic guitar textures, “The Devil Lives in the South” opens the floodgates on the shimmering tonality that The American Revival are discharging in their all-new album The Saint and The Sinner, which is out everywhere that independent country music is sold and streamed this March 22nd. The sixty second jam sets the table for the grinding dirge of “The Way You Can” and its stampede of bluesy rhythm, but as we soon discover, The American Revival are only just getting started in cratering us with their emotionally-charged musical mysticism. Brutal basslines and bone-crushing riffs soon fall silent as we come upon the singer/songwriter-style ballad “Lovin’ I Gave You,” but the exuberant energy is far from dying down as we press forward in the album’s tracklist.

“Lovin’ I Gave You” sees The American Revival keeping with the pace of the first two tracks but adopting a much more melodic approach to their fervent string play. In “Remember This,” The Saint and The Sinner starts to slow down a little bit, but only to make it possible for us to cozy up to the pained poetry lining the grooves of this startlingly bright ballad. We get rolling with a rock n’ roll rhythm once again in “Friday Night,” but the shift in gears in no way prevents the heavenly harmonies of the last track from lingering in the atmosphere long after we’ve moved on to the next chapter in this record’s surreal story.

With riffs as pulverizing as a sack on your third-string quarterback in fourth quarter, one has to wonder just how potent a jam “Friday Night” would be on stage, and it’s chest-pounding viciousness meets its match in the single “On My Way” and the plush, but unforgiving, hook in the song’s chorus. “On My Way” is followed up by the classic rock ballad “Whiskey Kisses,” which in my opinion stands as the crown jewel of The Saint and The Sinner. It’s here that The American Revival unites their folk influences with their country/rock grooving, and the results are anything but fragmented. The staggering sway of “Texas Weather” is no less a showstopper, but it’s no wonder why “Whiskey Kisses” has been the group’s most discussed song ahead of this album’s release.

“Rise & Fall” spews its lighthearted harmonies all over a textured, pulsating percussion in the background, but there’s nothing strong enough to get between us and the loving lyricism found in the song’s opening verses. An ominous chicken pickin’ leads us into the darkly sensuous title track, and inside of roughly ninety-seven seconds of tension-building play, we’re poetically brought full circle from where we started in “The Devil Lives in the South.” Though not a progressive concept album by any stylistic measurement, The American Revival’s The Saint and The Sinner unfolds like a gripping piece of cinema, constantly keeping us on the edge of our seats in anticipation of whatever awaits us in the net track. It’s an unforgettable way of introducing the country music world to their sensational sound, and moreover, making their mark on a scene that’s desperately in need of some fresh flavor.