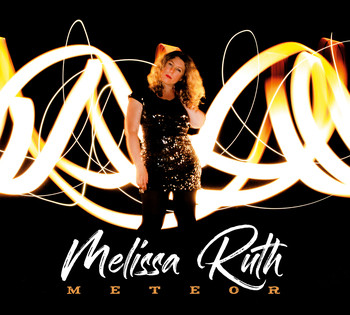 With a skipping beat to lead the way, Melissa Ruth’s Meteor comes to life in its first track, “West,” and the chugging drum and bass swagger is quickly met with a sultry vocal from Ruth that is as textured as any of the vivid string play transpiring beside her is. The mischievous grooves wander into “Long Haul Heartbreak,” and it’s at this point that our leading woman pulls out the big guns behind the mic and starts flexing some seriously intimidating lyrical muscle. Ruth is a force to be reckoned with in this swanky blues track that comes to us peppered with a fierce, almost rebellious rock n’ roll tonality ready to crater us with its gargantuan weight and edgy accompanying rhythm.

The title track slows down the urgent tempo found in “Long Haul Heartbreak” and clears some space for Ruth to fill the atmosphere around her with mellow melodies that linger in the air long after we’ve moved on to the 70’s style folk rocker “Goodbye Again.” The mood is volatile as we cross the minimalist verses that act as a bridge to “Broken Heart,” but it’s in this fifth track that we’re invited to hear a side of this singer/songwriter’s personality that she has thus far kept hidden from the public eye. Her vocal takes on the righteousness of something out of the jazz age, and while the backing band is holding up their end of the song excellently, all of our attention is being directed towards the sparkling vocal harmony emitted from Ruth herself.

“Sugar Pill” creeps out of the silence with a sulking bassline that is as elegiac a device as the lyrics dancing around it are, but its somber energy is broken up by the manic percussive prowess that gives “Free Your Life” its dramatic introduction. This track is a good buffer for the carnal country whispers that meld together with a spindly guitar lick to form “Hey Mr. Bartender,” my favorite song from Meteor. This LP, in its totality, is devoid of the robotic clicking that constitutes acceptable drumming in the majority of contemporary indie rock releases, and this track perhaps epitomizes its fascinatingly textured musicality in all of its glory better than any other does. “Take It All” gives us a slick, midcentury pop tempo flanked with a dangerously dark serenade form Ruth, but it doesn’t minimize the impact of the previous track at all.

Meteor reaches the finish line with a pair of surreal country ballads titled “The Knot” and “You Are Not Alone,” and though neither song runs more than five minutes in length, they’re probably two of the most elaborately constructed tracks that Melissa Ruth shares with us in her latest release. They definitely leave us wishing that there were another eleven like them to follow, but in reality, I think that even more of this dazzling material would have probably overwhelmed me beyond being able to enjoy what we’ve already got here. Ruth is the diamond in the rough keeping an uncompromisingly provocative variety of Americana alive in her music, and this is unquestionably her finest hour yet. Meteor is out this month, and I believe that it absolutely lives up to every bit of the hype that has surrounded its arrival.