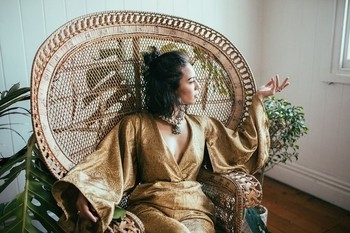 Combining intersectional feminism, black girl magick through movement and visual spells, the captivating video takes inspirational cues from the Netflix show, The OA, as well as the way ‘spells’ are presented on shows such as The Magician.

The video’s director, Duckworth comments on the shoot, which was guided by a strong group of wāhine toa: “It was amazing working with such a heavily female team for this concept. We had a female producer, director, cinematographer, choreographer and all female talent. With themes of female strength and depictions of powerful magical women it felt important that this was being made from the perspective of women. A film set is such a traditionally masculine environment, so that dedication to making sure there are plenty of women on the crew really brings in a different energy and is super rad for creativity and collaboration.”