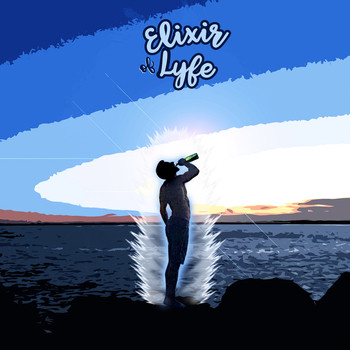 The Gillum Bros are actually brothers, unlike, say, the fictitious sibling Ramones. They call Arcadia, California home, although they were born in Detroit, Michigan. An elixir is either a magical or medicinal potion, depending upon how you choose to use the term. In this case, it’s utilized – one surmises – to describe a romantic partner.

It’s also a short tune, which begins with a jazzy/classical electric piano intro. Its lyric starts with a great string of words. “I step into a conga line/With nothing on my mind except for you.” The conga line imagery fits perfectly because the track is built upon a pop-y, tropical groove. It’s a fulfilling partner that drives these words and beats. “You fill my cup/You fill me up/You fill me up,” they sing, joyfully.

This other one’s got it all, but he wants this object of his affection to also join his world. “Take a sip to my point of view,” he invites. In some respects, this song is a throwback to 70s yacht rock. It’s light and easygoing, kind of like Rupert Holmes’ “Escape (The Piña Colada Song).” The singer is obviously making a play for a good-looking person within direct view. It’s probably not politically correct, now that we’re in the #metoo era, to talk about pickup lines. However, this song sure does sound like a romantic invitation, put to a beat. Whoever is being sung about in this song sure sounds to be good for whatever ails him. Calling that person “the elixir of life” might be pushing the description a little far, but then again, love songs have always described romantic encounters as life and death affairs. It wouldn’t be a true love song if that certain someone didn’t have the power to save your life.

“Elixir of Life” will not relieve your pain, put a spring in your step or grow hair on your head. It’s just a pop song, after all. It will, however, bring a smile to your face, if you let it. The Gillum Bros have a knack for crafting enjoyable tunes, and “Elixir of Life” is, at just over three minutes long, a sweet delight. Drink it up!