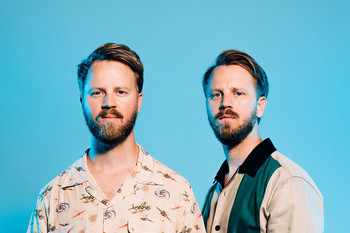 Of all the young illustrators working in America today, there are few with such an immediately identifiable style as Sean Solomon, art director of the FOX TV animated show Lucas Brothers Moving Co. His style – simple but oh-so-expressive faces, pastel backgrounds, thin, curved lines, and satirical references to pop culture – has been often imitated, but never successfully duplicated. To get the real thing, you’ve got to go to the source. The members of the Santa Monica band Cayucas have never been ones to cut corners – and they’ve enlisted Solomon to make a video for a new song that’s already made quite a splash on streaming services. “Jessica WJ,” which has racked up over a million plays on Spotify since its late 2018 release, is an instantly memorable pop-rock confection, and Solomon’s clip for the song underscores its wit, its freshness, and its anxious undercurrents. Rarely is a director’s complete understanding of a song and a bind as manifest as it is here.

Perhaps that’s because Solomon is a rocker, too. He’s the frontman of Moaning, the noisy post-punk trio that lit up the Los Angeles underground last year with their self-titled debut album. Maybe it’s because the music of Cayucas positively begs for music video treatment: it’s moody, ruminative, tuneful, a perfect soundtrack for a spring day. Prior Cayucas videos, such as the sunlit suburban reverie of “Cayucos” and the hyperactive stop-motion of “High School Lover” have been California dreams, and they’ve been viewed more than a million times. “Jessica WJ,” a tale of a missed romantic connection – and the lengths they’ll go to make up for it – is, perhaps, the quintessential Cayucas song. The track is Southern California breezy, but there’s a bit of chill in the wind, too. They’ve found a specialist in melancholy to man the boards: Grammy-winning producer Dennis Herring, who has overseen wistful, nostalgic recordings for Elvis Costello, Modest Mouse, Ra Ra Riot, and many other bands.