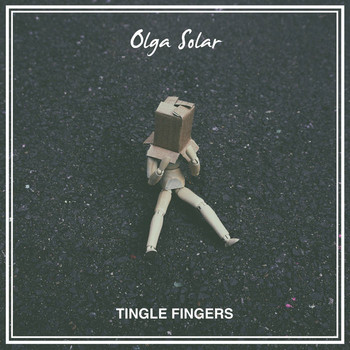 Olga Solar’s “Tingle Fingers” is taken from the album Antilullaby. It vacillates between being soothing and jarring. It may just remind you of Kate Bush in her prime.

The song’s instrumentation combines guitar and keyboard, and backs Solar’s expressive vocals. It’s a moody piece of music that sets course on a groove and then sticks with it for the track’s 3:20 duration.

Lyrically, the song is dense and layered and not easily figured out. The first three lines set the scene. “Calm these tingle fingers/Thaw these veins/Central system failure.” The last line suggests something more mechanical than human. Yes, all humans are a bundle of nerves, but “central system failure” sounds more like a computer breakdown.

The next lyrical section of the song leans closer toward warmth than the cold, though. In contrast to the earlier words about veins in need of thawing, Solar now informs us about a “boiling point achieved.” However, even though temperature changes from the first verse to the second, the music doesn’t mirror this alteration of degrees.

This heat treatment is followed by descriptions of activity. Rather than describe the affect of circumstances, Solar sings: “So hold, break, release/Then go, tell, repeat.” Activity, it appears, is followed directly by sharing the experience.

The line, “Haze can help when fearful” is also one of the song’s most memorable word strings. It’s human to try and drown out the senses when faced with fear. We can’t make circumstances go away, but we can make ourselves – so to speak – go away. In the worst sort of reaction, this can involve drugs and/or drinking. In the best-case scenario, we as humans find a way to temporarily distract ourselves from negatives.

You’re left with the impression Solar has finally reached this state of distraction when she sings: “Parched thoughts, stagnant, arid, none.” Later, she adds, “Empty spaces yearn to be filled.”

It’s difficult to make perfect linear sense of Solar’s “Tingle Fingers.” This is, at its core, an impressionistic song. It’s as much poetry as it is pop music. Perhaps Solar hasn’t fully formed her thoughts and reactions to whatever memory inspired this track. It’s almost as though she’d jotted down her initial impressions, in hopes of forming a more sophisticated and thought-out telling of her experience later.

Olga Solar’s “Tingle Fingers” is not a song that reaches out and assaults you with its motives. Rather, it’s the sort of song that draws you in, slowly, if you let it. Solar wants you to exit your world and enter hers. She’s sharing intimate details of her experiences and she’s hoping to trust you with these notations. Even though Solar never gives us a complete picture, perhaps a few of her shared thoughts will resonate with you. Maybe something she sings will touch a nerve. Prompt a memory. Suggest a thought.

Most pop music sounds like the musing of extroverts. Not so with Olga Solar — at least not with “Tingle Fingers.” This is the sound of an introvert reaching out. Listen and handle with care.