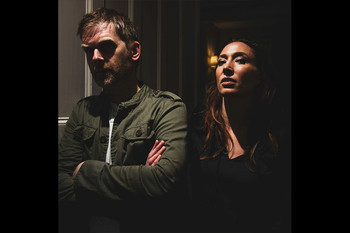 A video doesn’t need to look like a movie to be effective, but for some styles, it helps. Hybrid makes widescreen electronic music – the type that’s called “cinematic”, for good reason – and throughout their two-decade run, they’ve always shot videos that match their ambitions. What’s more, the British band has done plenty of work on actual movies made for theatrical release: they’ve scored more than twenty films, including Vice, Domino, and, Billionaire Ransom. They understand how to use music to amplify their storytelling, and how to match sound with visual images. They’ve applied all of that experience to the immersive clip for “Hold Your Breath” – an eight-plus minute video that plays like a Hollywood blockbuster.

“Hold Your Breath” is the sort of track that demands a dramatic video. Everything about the song suggests action: the beats, the synths, the lyrics, the subtly urgent vocal performance. It’s a standout cut on Light Of The Fearless, the acclaimed fifth Hybrid album, and one that demonstrates the flexibility of the group’s sound. Elements of rock, pop, breakbeat, trip-hop, and classical music collide and fuse and break apart in real time (there’s even a brilliant cover of Tom Petty’s “I Won’t Back Down”). We don’t need to tell you that Fearless includes music inspired by the recent soundtracks that Hybrid has composed – you’ll feel it. “Hybrid” is a sonic movie, and, like any good art film, it’s one that rewards audience re-visitation.

To make the clip for “Hold Your Breath,” Hybrid has called upon some of their friends from the realm of filmed entertainment to give them a hand. They’ve landed some very impressive collaborators, including Academy Award-winner director John Stephenson and actor James Purefoy (HBO’s Rome, Solomon Kane, Altered Carbon) to portray the clip’s malevolent Mr. Black.