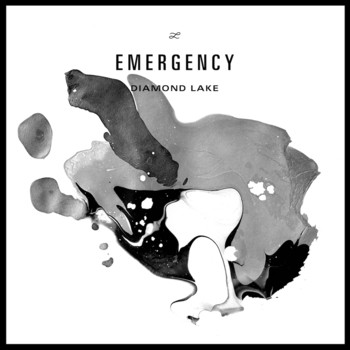 Diamond Lake’s “Emergency” kicks off with an urgently strummed electric guitar. Next, drums kick in followed closely by a fluid bass part. When the vocals arrive, they’re scratchy and equally urgent – which is called for by the pressing lyric.

The first band that comes to mind – and this is before the vocals even hit the mix – is Arcade Fire. The guitars, which switch between a few chords during the intro, combined with the track’s drum pattern, sounds a whole lot like Arcade Fire’s first music, back in 2004 with Funeral. It’s not just the sound that brings Arcade Fire to the forefront, though. It’s also to passion of the performance. That group has never lost this initial enthusiasm, even though the act’s sound has evolved over the years.

It’s a little tough to figure out the meaning of “Emergency.” It could actually have been inspired by a natural disaster of some sort. That’s likely not the scenario, though, because it sounds more like relationship issues. Vocalist Jarrod Riddle seems to be speaking to a mate about a broken partnership, “cracked at the core,” as the lyrics put it. “Let’s risk it all for one more go,” Riddle suggests.

This song contrasts markedly with typical relationships songs, if it is – indeed – about a relationship. Sure, Foreigner had a big hit with a song titled “Urgent.” But generally, love songs are fairly relaxed. Performers may be tied up in knots emotionally when they’re singing about love and romance, but they don’t ever want t to appear uncool. They’d rather send out false signals of ever-present strength and security, instead.

Diamond Lake is not quite so cool, though. This is a song that lays all the cards out on the table. Who knows what might have happened to create this desperate situation? We only know it’s reached a boiling point where both parties need to drop everything and come to the table.

Of course, this could be a politically-motivated lyric, too. For instance, contemporary politicians are warning us that, if something isn’t done soon about climate change, we might all be in for big trouble. The same sort of rhetoric was going around after the nuclear meltdown at Three Mile Island. Similarly, the Cold War stirred up many passionate cries for peace between the United States and the Soviet Union. Might this song be foretelling a potential national or global emergency? Possibly.

Like all truly fine rock recordings, this act leaves much of the interpretation up to the listener. It may just apply to anything the listener wishes. (Of course, Diamond Lake knows full well what inspired the track).

Some wonderful music just makes you feel good. Relaxed, at peace and worry-free. Other music, though, agitates you in the best possible ways. A pastor once said he hoped his service would comfort the afflicted but afflict the comfortable. “Emergency” comes off as one of those songs intended to afflict the comfortable. Even shock them, perhaps, out of their lethargy. It’s like a clarion call, for the purpose of making all within earshot aware of something urgent going on.

You don’t need to know exactly what “Emergency” is about to appreciate it. Just be glad Diamond Lake has translated pressing thoughts into equally pressing and captivating music.