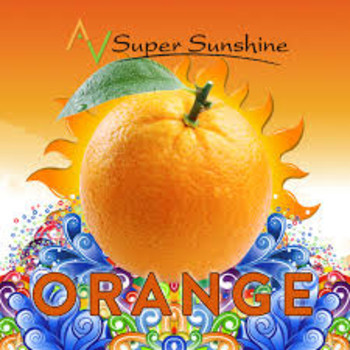 Guttural grooves penetrate our speakers and bleed into a riff-rocking distorted guitar that wants to suffocate everything around it with its feverish resonance as we enter the rock mix of “Orange,” one of three mixes of the brand new single by the incomparable AV Super Sunshine. AV starts to sing with a smoky timbre that flamboyantly bonds with the swinging beat and forces us to synchronize our own hearts to its rhythm. With an Iggy Pop-esque swagger, he belts out vicious verses and then slows down in the chorus, letting the melodies surrounding him wash over us with impunity. The harmonies are understated, but the strings are intent on flooding the master mix with a tonality that acts as a time machine whisking us away to the birth of glam.
“Orange” gets an EDM makeover in the club mix of the single, and opens with a galloping beat that is much more agile than what we hear in the rock version of the song. The glam qualities are still intact, but they’re minimized here as to project a sleeker sounding rhythm. AV doesn’t attack the microphone as harshly in this mix as he does in the radio mix of the song, but his energy is still off the charts at any rate, and calling the confidence that he produces from center stage anything other than infectious and attractive simply wouldn’t be accurate. If I had to guess, I’d say that nightclubs, especially in EDM-heavy scenes on the east coast, are going to eat this single up like nobody’s business.

The third and final version of “Orange” is a radio mix that, despite being crafted for FM airplay, is probably the most endearing, spacey and psychedelic-tinged of the three. From the first time that I ever heard this rendition to this very moment, as I sit here listening to it again, I still feel as though I’ve yet to appreciate every intricate element that this mix has for us to explore. The piano shimmers with a surrealism that is somewhat distracting from the grizzly drumming, a component that contributes a lot of contrast to the song and makes me want to play the track at the loudest possible volume to feel all of its physicality without anything coming between us.
Make no mistake about it – AV Super Sunshine outdid himself with this latest work of art, and I must say that while I have come to expect the unexpected from his studio transmissions, these three mixes are going to stay with me for a long time. It’s almost as if we’ve been given an inside look at his process, and by that I mean that when we listen to all three tracks together in a single sitting, we’re able to examine the context, tonality and rhythm of each without getting lost in the surface level elements like hooks, catchy lyrical rhyming or virtuosic guitar and synth harmonies. This is as postmodern as pop gets in 2019, and for disciples of alternative music like myself, it doesn’t get much better than what AV Super Sunshine’s got for us in “Orange.”

The music of AV SUPER SUNSHINE has been heard all over the world due to the radio plugging services offered by Musik Radio Promotions. Learn more – https://musikandfilm.com