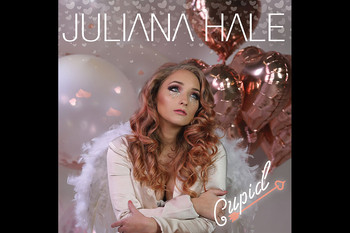 Through the centuries, the figure of Cupid has fascinated writers. Other mythological characters have faded, but the son of Venus with the magic arrows of desire remains vivid. Cupid represents the sudden, unexpected arrival of love – and not a slow-smoldering love, either, but a violent, explosive passion. He announces his presence with authority (and with a bolt through the heart); he brings excitement, but he is not always a welcome visitor. Nashville pop singer Juliana Hale is the latest artist to feel the sting of the arrow, and judging by “Cupid,” her new single, that shaft bit deep.

“Cupid” is the first new track from Hale since the summer ’18 release of Small Talk, a four-track EP that established the native Californian as a versatile, ambitious, and uncommonly forthright pop singer. Here was music that sounded modern – forcefully so – but was positively old-fashioned in its commitment to honesty and clarity. Even “Overrated,” a pulsing, propulsive club track, radiates sincerity and personal pain. “Cupid” strips away the synthesizers and drum machines, and presents Juliana Hale’s music in its rawest and most naked form: just piano, cello, and vocals. On this track, there’s nothing in between the listener and Juliana Hale’s emotions: it’s brave, searing and intoxicating in equal measure. So immersive is this track, and so convincing is her performance, that you shouldn’t be surprised if you feel the pinch of Cupid’s arrow yourself.