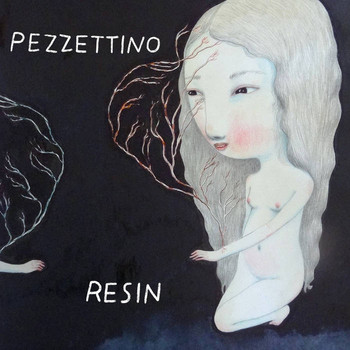 Resin – by Pezzettino (the recording name for Margaret Stutt), with all respect intended is a brilliant album of compositions you just won’t find every day. Strutt is an amazing artist with so many ways to describe her voice and musicianship it’s a story all its own. This is her 11th album, so it’s really no surprise to finally hear such a quality artist because it takes a lot of time and effort to get around to the ears that appreciate such great talent. Making her way from Wisconsin to Oakland, CA with roots also planted in Milwaukee and Brooklyn, it’s a long way to the masses and I’m glad to be one of them.

These songs all have substantial melodies and fantastic lyrics, some dark, some bright but nothing offered is of filler status. Strutt takes you inside the mind from the outset with “Home” and right away you know this is a classical pianist underneath it all, and it’s important to have skills but it doesn’t mean anything without meaning and feeling, of which Strutt possesses bucketloads of as the track builds as it commands your attention, complete dreamy vocals and all. The piano flurries are a thing of beauty as well as the crashing cymbals on this fabulous opener.

“wikiHow” comes from another place altogether with the vocals fooling at first, before things pick up with amazing bridges of musical excellence beyond description. This also contains a trippy outro and goes down as one of the tracks worth the most exploration once heard. “If You’re listening” that is, and it’s an epic follow-up with an outdoorsy vibe. The lyrics own this track first and foremost, but its slightly percussive ambience also does wonders on the senses and leaves you mesmerized. And don’t forget what she’s saying, “depends on who you are” and serves as the message.

By the time “Falling Down” comes into the picture, you’re fully captivated by the hypnotic quality of this album. This lovely track even contains some incendiary language to get the point across, that being one of pain which her music soothes and heals without question, especially on this stand-out number. At this point, it’s time for more fun with lyrics and storytelling about forgetting “How To” with one of the more uplifting tracks. Everything about it is jubilant and musically exciting with more crashing cymbals in the outstanding percussion.

“Virginia” comes along at just the right time as well, with a straight forward, traditional storytelling ballad that takes you even more inside the mind of this illustrious artist with some basic musical backing around her showcased voice. And it seems to never end with “Shower Song” coming in to wash away more of the white noise of the world with a remarkably wry look at herself in a song that could be the second part of the previous track, even reflecting upon the first track on the album. By now the concept is clear and the last two tracks go to show you’ve been at home all along, with “Sleepless” resulting in “Cloudy Covers” on this well-crafted release.