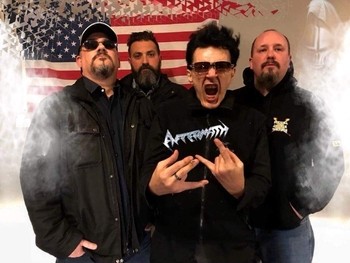 Aftermath has been setting a very high bar in the thrash metal world for over thirty years. Since their debut in 1985 the band has navigated an ever-changing musical landscape, and influenced countless others along the way. They’ve always done things their own way, and they’ve outlasted labels, peers, and critics, but never their fans, who have been a loyal legion since the beginning.

It wasn’t always rainbows and roses, either. Whether it be a label folding in the middle of the recording process, or a landmark legal case with Interscope/Dr. Dre over the Aftermath name, time has tested the band. With experience comes wisdom, and on their new album There Is Something Wrong, the band continues to seamlessly fuse social commentary, unrivaled technical skills, and a rare knack for creating a thrash sound for the masses.

“Diethanasia” is the embodiment of the fury and fire that so powerfully defines Aftermath. In a darkened room with minimalist spotlights cast upon each member thrashing in a foggy soundstage, the quick cuts, muscular riffs, and furrowed brows by director Davo create an unrelenting visual experience, perfectly complimenting the frenetic energy of Aftermath.