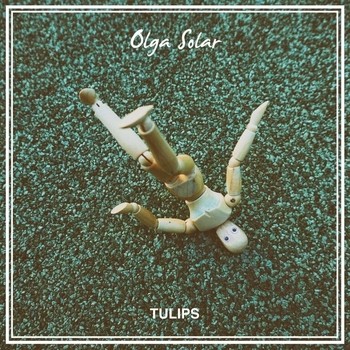 Olga Solar’s “Tulips” is a delightfully honest love song, of sorts. The song’s best bit is its wordless chorus of, “Da-da-dum.” Sola sings the song’s verses in a sort of talk-sing, slightly sardonic tone. She’s one smart cookie, it’s obvious right out of the gate.

Although Solar’s voice has a slightly jazzy, quivery quality, some of her lyrics are quite un-jazz-like. For instance, when she sings deprecatingly, “I’ll make this mistake again and again,” she sounds every bit like Morrissey. Morrissey, as you may already know, has made a career out of detailing all his perceived failures. (And yet, even with all his downfalls, he remains an international pop star. Funny how that works, eh?)

“Tulips” is the kick-off single from Solar’s first album, Antilullaby. The title alone tells you Solar isn’t in the business of singing comforting goodnight stories. Instead, she wants to make you awake and aware. “Tulips” is just such a song. Musically, “Tulip” is built around a skipping, pizzicato groove that is jumpy, yet not particularly danceable.

Solar is from Australia, the same country that also gave the world the oftentimes wacky Men At Work. Venturing out as a solo artist is a new wrinkle in Solar’s career, too. She got her start playing violin in pit orchestras, as well as scoring short films. She even has experience writing musical theatre. The musical theater part makes sense, however, when you listen to “Tulip.” This is a song you can well imagine being sung in a musical, more than coming out of top 40 radio-playing speakers. It’s smart, literate and melodically pop. It’s not however drenched in R&B, with touches of EDM and hip-hop, the way far too many contemporary pop hits are these days.

When pressed to name her musical influences, Solar lists an eclectic group of musicians. These include Paul Simon, Laura Marling, Feist, Silverchair and Sondheim. None of these things are anything like the others, to bastardize an old Sesame Street song. Instead, this is a disparate smattering of inspirations, ranging from musical creators, older folk-rockers, rock bands and modern singer-songwriters.

The biggest question raised by “Tulip” is just where Solar’s music fits in the grand scheme of our modern scene. She’s a little too adventurous for soft rock stations, but too smart and witty for sex-obsessed pop radio. She’s likely one that will need to gradually find her audience, while her audience equally gradually finds her. Such a circumstance can try the patience of even the most dedicated record company. Sadly, record labels don’t develop artists the way they used to, allowing them to grow and discover their voices over a series of albums. Oh no, the best image of the contemporary record company world is a man in a business suit, constantly checking his watch.

With all this said, though, “Tulip” is a delightful piece of pop music confectionary. It will beguile you about as much as it will please you. It’s not a thing that fits neatly into most anybody’s expectations. In a perfect world, most artists would be like Olga Solar. It’s not a perfect world, of course, but Solar is a perfectly fine example of an artist that marches to the beat of her own drum. No safe tiptoeing through the tulips here.