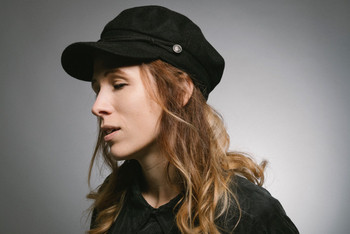 Katey Brooks is a clear-eyed rebel in an industry that demands consistency. A devastating songwriting talent that has drawn comparisons with Jeff Buckley, Brooks has no shortage of famous admirers and yet she has resisted formula. Over a career spanning four continents, she’s journeyed from intimate living rooms to opulent concert halls, from dive bars to decorated studios with some of music’s biggest names. The wandering troubadour defies easy classification, with a back-catalogue incorporating soul, folk, blues and country. With her new album under construction, the mercurial songstress is more determined than ever to do things her own way.

Growing up inside a cult, as a child Brooks found refuge in song. “It was a very chaotic upbringing, full of some pretty colourful and sometimes unsavoury, characters. But when I sang, I felt free and connected. For as long as I can remember, it’s been my way of getting what I need to say out”, she reveals, “When I was 22 my mum got ill and she died. And then not long after that, my lifelong best friend went missing and she also died. That’s definitely had an effect on the course of my life and my writing. I guess I’m lucky that I have songs that I can write, as a means to deal with things”.

All of these hardships seem to have driven, rather than dragged her under. Brooks has certainly had her share of romantic turbulence, not to mention the struggle to come to terms with her sexuality. “In my most recent work I’ve finally been able to sing directly about women instead of using the mysterious ‘you’. I’m a private person in a lot of ways and I never wanted to be a poster girl for anything. But a few years ago I just thought screw it; I want to sing completely honestly. It felt like a weight lifted.”