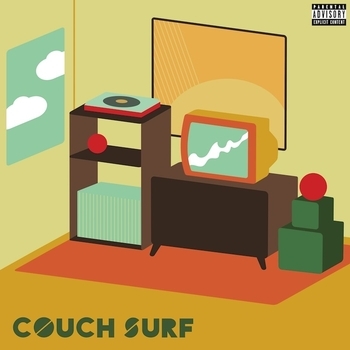 Every day, people go to California for various reasons. One might go for the thrill that the great state has to offer including various attractions like Disney World, Hollywood Hills, Beverly Hills, or even because of the huge hub of actresses and actors…Quite possibly while there, a quick stroll to see the Hollywood Walk of Fame or just to catch some of the beautiful Santa Monica sun, there’s one great item that has been hidden and it is non-other than Couch Surf, and their latest single, “Is This Real?” really doesn’t seem real as it hails from an entirely different universe: Good Stuff!

The Band, Couch Surf, consists of Singer/Songwriter Taylor Barnes. At first listen, Couch Surf has an eclectic mix of rock, similar to the likes of Gorillaz, Kurt Cobain of Nirvana, and have the unique ability to create a treasure of strategic sound! Taylor Barnes showcases a wide range that completes the heavy feeling from the lyrical content being supplied. But the most amazing feature of the song is the guitars used in the production! Couch Surf, have a way of strategically placing each working element in “Is This Real?” and don’t leave too many moments for the listener to question whether they are a band that will be here today and gone tomorrow: Because they actually create music that will be able to be played 40 years from now…

At first listen, “Is This Real?” makes an introduction with a very laid back and subtle streaming guitar that seems to sit heavy on the right side of the brain! It mixes pop, folk soul, and a computerized voice comes over saying “Is this real? Or are you mine? Is this something in my mind?” direct lyrics from the single, “Is This Real?” It seems like a guy is trying to mix romance into a collective effort to showcase the parallels of human involvement but keeps having to ask the question is everything around them real? Everyday life is a stretch especially when adding life circumstances to it that no one can seem to control. Questions are asked all the time about the perceptions associated with imagination or just what the human eye can see and interpret. And this song is one that will cause anyone to stop and think as it has a lot of hidden messages shaped all within the song. It could refer to romance, and in the next minute, it could take on a whole new meaning! Pure Magic!

Couch Surf is definitely the band to start looking out for in 2019! With such heartfelt lyrics, it would be a treat to catch them live and to hear just how awesome of a band they are in person. When a person can relay messages in a very stripped down and meaningful way, it spotlights the fact that they care about what they have to say along with what perceptions are being made about their music! Couch Surf is definitely a recommended band so go catch them in action!