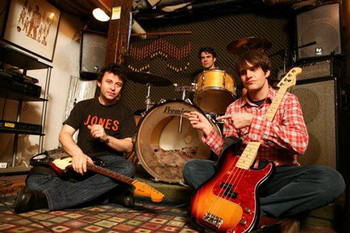 Indie rockers The Campbell Apartment unleash an anthological swansong in the form of their new track “Burn Baby Burn,” which is essentially five different uniquely stylized songs mashed into a single all-encapsulating juggernaut. We start off with a blistering acoustic guitar salvo that is accompanied by punkish, feisty lyrics singing the praises of a girl named Amy. The passion is as furious and weighty as the mix of the strings is, and with every vivid vibration we can feel the earth quake beneath the feet of the band. The jittery guitar slams into a thick, electrified wall of riffage and suddenly we find ourselves dead center in the middle of a lumbering alternative rock thrasher; the tempo modulates ever so slightly as the bassline sinks its razor sharp teeth into us, but there is no pain – only a beautiful, reverberating harmony lingering in the background.

The black and white march of 60s pop penetrates the middle of “Burn Baby Burn” with a Beatlesy strut that is mesmerizing and ever-fleeting, and before we know it the grind and grate of the second pile of riffs is smothering us under their pressurized mix once more. “Nothing bears repeating, so just burn baby burn” we’re told before meeting a spike in feedback that throttles us into the final thirty seconds of the song. The band ebb and flow with the vicious grooves until they’ve pummeled every last drop of tonality from the bass and guitar and there’s nothing but a lone distorted melody left behind in the ash heap.

“Burn Baby Burn” has so many layers to it that it’s quite easy to miss some of its more intricate details during our first examination of its structure. The arrangement is extremely calculated and progressive in nature, transitioning from one pace to the next without a hitch, but the master mix becomes significantly augmented with each movement. The rigidity of the drumming is softened by the wallop of the guitar, which in itself is an exaggerated reflection of the cryptic lyrics. We twist and turn a number of times as we work up to – and eventually recoil from – the chorus, but this single is anything but a nauseating listening experience. It’s too evenly produced, too sonically sophisticated and too meticulously arranged to ever disorient the listeners, which is really something considering its ambitious design.

The Campbell Apartment have dished out some memorable moments in years past, and “Burn Baby Burn” sees them continuing to surprise both their longtime supporters and critics alike with their command of provocative melodies and rousing lyrical concepts. This could be their most elaborately devised composition to date, but its slick harmonies and cerebral arrangement shouldn’t leave casual listeners intimidated. Its strength comes from its infectious swagger, which bleeds through the speakers and invites us to join in the churn of the percussion and the yearning of the vocals. Engaging, evocative and stylishly produced, I highly recommend “Burn Baby Burn” if you’re looking for smart rock n’ roll that puts more stock in a brilliantly creative construction than it does lustrous but predictable pop polish. The Campbell Apartment haven’t stopped wowing us yet, and if anything, this single proves them to be getting even more gripping and imaginative with age.